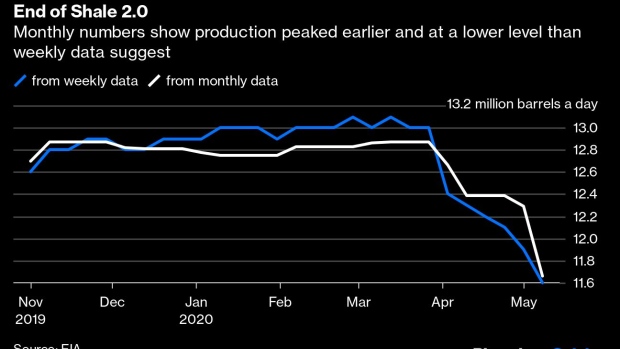 (Bloomberg Opinion) -- American oil producers have cut much more output than you think. Their reaction to market forces has been bigger than official data suggest, and that means the U.S. is actually working alongside Saudi Arabia, Russia and other big oil producers, to help balance oil supply and demand — even if that wasn’t quite what President Donald Trump intended.

Two sets of data from the U.S. Energy Information Administration show that crude production is now about 11.6 million barrels a day, down by between 1.2 million and 1.4 million barrels a day, or roughly 10%, from plateau levels reached over the just-ended winter, depending on whether you use the weekly or the monthly numbers.

To put those U.S. figures into perspective, the members of the Organization of Petroleum Exporting Countries and their allies agreed last month that they would each cut their production by 22% from baselines that, for the most part, reflected October 2018 levels. Early evidence from tanker tracking data monitored by Bloomberg shows that some, like Saudi Arabia, have made very quick, big steps toward that target; others, like Iraq, are lagging behind. But all the big OPEC producers — including Iraq — have increased their prices and cut allocations of crude to key customers for June, suggesting that compliance levels will improve.

By comparison, the official figures suggest the U.S. has made much smaller production cuts. But those U.S. figures are probably underestimating the size of the reduction forced on American oil companies — and underestimating it by a huge amount.

The flow of oil going into the supply chain must balance the volume coming out. That’s just basic math.

But if you add production, imports and crude taken out of storage tanks (the supply side of the equation) in the weekly EIA data, this doesn’t equal the amount processed by refiners, used, exported or put into storage tanks (the demand side). The EIA acknowledges this difference by publishing a crude adjustment factor and, in absolute terms, that number is getting very big indeed.

The amount of crude coming into, or being sent out of, the country is pretty well documented. So too is the amount going into and out of storage tanks and into refineries. So the most likely source of the discrepancy is the production numbers.

If the adjustment factor does reflect an over-estimation of crude production, American oil companies could be pumping as little as 10.6 million barrels a day. That would be an output cut of almost 2.4 million barrels a day, or 18%, bringing them much closer to the reductions agreed to by OPEC and its allies.

There is plenty more circumstantial evidence that the U.S. is producing less. There are now fewer rigs drilling for oil in the U.S. than there were even during the slump of 2016, when a collapse in oil prices brought about the end of the first shale boom. Consultancy Facts Global Energy published a note on May 1 arguing that company earnings reports signaled a potential 3 million barrel a day drop in U.S. production by the end of June. We would seem to be well on the way to that figure.

Even though President Trump has sought to protect America’s oil industry and cajole others into cutting output to buoy up prices, the market seems to be making sure that the pain is being shared. But those deeper cuts, though involuntary, are helping to bring global supply and demand back into balance more quickly, and setting a firmer stage for the start of oil’s recovery.