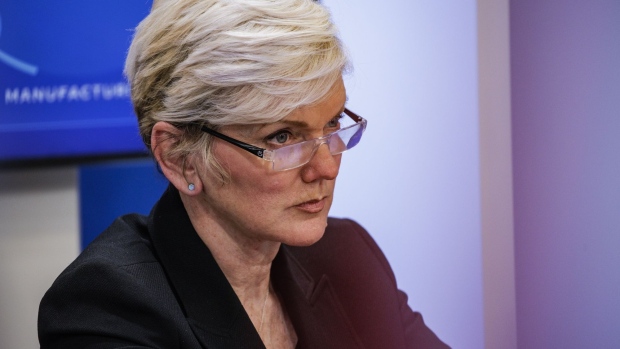 An oil well pump jack operated by Chevron Corp. in San Ardo, California, U.S., on Tuesday, April 27, 2021. Oil climbed by the most in nearly two weeks with the OPEC+ alliance and BP pointing to signs of a robust demand recovery taking shape in parts of the world. , Bloomberg

(Bloomberg) -- Oil industry executives are meeting with U.S. officials this week as surging energy prices and mounting national security concerns bring together two groups that have had a distant relationship since President Joe Biden’s inauguration.

Department of Energy officials including Secretary Jennifer Granholm will meet with representatives from Exxon Mobil Corp., Shell Plc and some shale producers on the sidelines of the CERAWeek by S&P Global conference in Houston, according to people familiar with the matter, who asked not to be named because the meetings are private.

Crude prices surged to more than $130 a barrel Tuesday, the highest since 2008, after the U.S. and the U.K. said they will ban Russian oil imports, choking off yet more dollars from President Vladimir Putin as he continues with his invasion of Ukraine.

The U.S. is one of the few countries that can help replace Russian energy exports over the medium term. But executives have routinely complained about little or no dialogue with the Biden administration. The industry argues that it needs a more supportive energy policy and rhetoric from the administration if it is to commit the large sums of money required to grow production.

Exxon and the Department of Energy didn’t immediately respond to requests for comment. A Shell representative declined to comment.

American oil and gas companies have everything they need to ramp up near-term production, a White House official said. Oil and gas demand is increasing as the world emerges from the pandemic and producers should keep up with demand in the near term, the official added.

The U.S. could double its rate of oil production over the next 18 months but “it’s going to take cooperation with Biden, it’s going to take co-operation with our shareholders,” said Scott Sheffield, Chief Executive Officer of Pioneer Natural Resources Co., the biggest oil producer in the Permian Basin. He declined to comment on the existence of, or any involvement in, talks with government officials.

“I’ve been told his mindset is changing,” Sheffield said, referring to Biden.

Mike Sommers, the CEO of the American Petroleum Institute, the largest energy lobbying group, said Tuesday the best thing the White House could do now would be to hold a meeting with industry leaders.

In another sign that relations between the industry and government are beginning to thaw, the White House held a call with industry representatives prior to Biden’s order restricting Russian oil imports Tuesday. The call gave an overview of the sanctions, according to people familiar with the matter. It wasn’t an opportunity for meaningful dialogue, one of the people said.

Biden said Tuesday his administration isn’t holding back production. He cited the 9,000 approved but unused drilling permits on federal land held by oil companies. “They are not using them for production now,” he said. “That’s their decision.”

The administration is also considering moves that would enable more oil to flow from Iran and Venezuela. But rocketing gasoline prices across the U.S crisis may force him to move more quickly.

John Kerry, Biden’s climate envoy, opened the CERAWeek conference on Monday by saying oil and gas industry companies “must be at the table” when mapping out the energy transition, a statement that was well received by the industry. He also said gas would play a key role in a low-carbon world.

The U.S. Department of Energy hosted a small dinner Monday night to discuss the energy transition and security with executives from gas utilities, steel companies, transportation and oil and gas more broadly, said Yuri Freedman, senior director of business development at Sempra’s Southern California Gas utility, who attended. The National Security Council was part of the discussions as well, demonstrating the priority being placed on security, he noted.