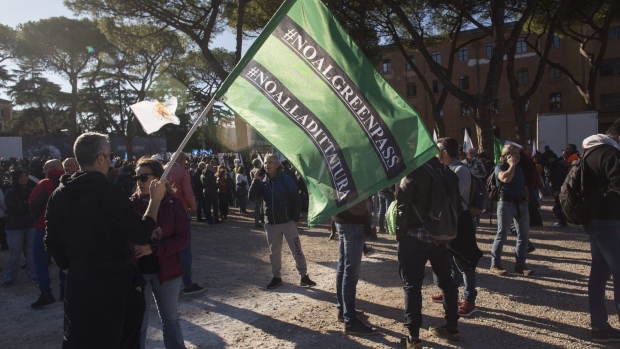 Protesters against the mandatory digital COVID-19 "Green Pass" at Circus Maximus park in Rome, Italy, on Friday, Oct. 15, 2021. Italy introduced some of the world’s toughest Covid rules on Friday without sparking major supply chain disruptions, despite scattered protests across the country against the requirement for people to prove their vaccination status before entering their workplace. , Bloomberg

The U.S. surpassed 10 million booster shots, with more doses now going daily to people who are fully vaccinated than those getting a shot for the first time. A judge ordered the head of Chicago’s police union to stop urging officers on social media to defy a requirement to report their Covid-19 vaccination status.

The contentious issue of Italy’s Green Pass, the strictest national vaccine mandate in Europe, helped spur some 200,000 demonstrators to the streets of Rome on Saturday. It was a counter-demonstration to far-right groups opposed to the pass.

Russia suffered record deaths, the first time the daily total has exceeded 1,000. Ireland reported the most new cases since January, as the government weighs whether to remove most remaining restrictions.

Australia said it has secured access to two additional treatments for Covid-19 from Roche Holding AG and Pfizer Inc.

The agreement with Roche is for 15,000 doses of the antibody-based therapy Ronapreve, with the initial supplies available by the end of October, the government said in a statement. The other deal is for 500,000 treatment courses of Pfizer’s oral antiviral drug, which is expected to be available next year subject to final clinical trials and approvals, the administration said.

Robert Durst Reported to Have Covid; on Ventilator (5:44 p.m. NY)

Robert Durst, 78, the New York real estate heir who was recently sentenced to life in prison for murder, has tested positive for Covid-19 and is on a ventilator, his lawyer told NBC News on Saturday.

Durst has been hospitalized and was “having difficulty” breathing and speaking, his attorney Dick DeGuerin told NBC News.

The U.S. surpassed 10 million booster shots, with more doses now going daily to people who are fully vaccinated than those getting a shot for the first time, according to data from the U.S. Centers for Disease Control and Prevention.

Among the 876,000 doses reported on Saturday, 392,000 were boosters or additional doses and 245,000 were first shots, according to a tweet from Cyrus Shahpar, the White House’s Covid-19 data director. More than 407 million doses have been administered in the U.S., and 77% of those eligible are fully vaccinated.

Extra doses of the Pfizer Inc.-BioNTech SE vaccine began to be given officially on Aug. 13 to vulnerable groups, including those older than 65. This week, a Food and Drug Administration advisory panel approved boosters from Moderna Inc. and Johnson & Johnson.

New Mexico’s hospitals are close to imposing “crisis standards of care,” which set the protocols for rationing medical care, according to a statement from Governor Michelle Lujan Grisham. Such crisis standards have already been put in place in Alaska, Idaho and Montana, among the states hardest hit by the delta variant. Hospital beds “remain in dangerously short supply,” she said in the statement on Friday.

Grisham also announced that the state will extend its indoor mask mandate, regardless of vaccination status.

Canada’s Yukon, the northern territory stretching to the Arctic Ocean, will enforce a vaccine mandate for all government employees and a vaccine passport for anyone wishing to participate in nonessential activities, Premier Sandy Silver said in a live-streamed event Saturday.

The new vaccine mandate will call for all front-line health-care workers and all government employees, including teachers and those who work for outside organizations funded by the territorial government, to be fully vaccinated by Nov. 30. The same day, proof of vaccination will be required for everyone in the territory to attend events and access nonessential services like bars, restaurants, theaters and gyms, Silver said.

Though the northern territory’s vaccination rate is over 80%, the highly contagious delta variant has contributed to a rise in cases among its 42,000 people, as it spreads quickly among those still unvaccinated. To ensure the population is protected the vaccination rate will have to climb to 90% at least, Silver said.

The contentious issue of Italy’s Green Pass, the strictest national vaccine mandate in Europe, helped spur some 200,000 demonstrators to the streets of Rome on Saturday. The protest, organized by the main Italian unions, was a counter-protest to a large demonstration last week, in which far-right protesters occupied the Rome headquarters of the union Ggil in opposition to the Green Pass.

On Friday, Italy made it mandatory for all workers to present a digital code upon entering the workplace or face a fine. The Green Pass can be obtained after vaccination or after testing negative for the virus, and employers will be responsible for checking certificates. Protests have erupted in cities around Italy against the pass.

A judge ordered the head of Chicago’s police union to stop urging officers on social media to defy a requirement to report their Covid-19 vaccination status.

The temporary restraining order hands a momentary victory to Chicago Mayor Lori Lightfoot in the fight over the mandate, which threatens to widen into a public-safety issue if police officers walk off the job. Cook County Judge Cecilia Horan ruled late Friday that irreparable harm was possible if union leader John Catanzara Jr. continued to make his statements.

The reporting deadline was Friday. Chicago has said that unvaccinated officers could be placed on unpaid leave, though city officials say there’s no immediate threat to the jobs of officers who don’t comply.

Ireland reported the most new cases since January, as the government weighs whether to remove most remaining restrictions. There were 2,180 new cases reported on Saturday, the health ministry said in a statement posted to Twitter. The surge in case numbers comes even with almost 92% of adults fully vaccinated. Still, hospitalizations are at about a quarter of what they were in January.

“The link between cases and harm has been severely weakened, not completely broken,” Colm Henry, a senior official with Ireland’s health service told RTE Radio. The government will decide on Oct. 19 whether to drop most remaining restrictions.

Macau will reopen some leisure venues such as cinemas, gyms, bars, beauty salons and nightclubs on Oct. 19, the government said in a statement on Saturday near the end of a two-week closure. Officials cited easing Covid situation in the city, where mandatory tests for all residents showed negative results. Casinos in the world’s largest gaming hub were not affected by the Oct. 6 closure.

Russia reported a record 1,002 Covid-19 deaths in the past day, the first time the daily total has exceeded 1,000. The number of new infections also hit a record daily high of 33,208, according to the government’s reporting center.

With only about a third of Russians vaccinated despite repeated appeals from President Vladimir Putin, more of the country’s regions are having to reimpose social restrictions.