U.S. hiring missed projections in September and wage gains cooled, offering a warning that the record-long expansion is poised for further slowing even as the jobless rate fell to a half-century low.

Private payrolls expanded by 114,000 after an upwardly revised 122,000 advance the prior month, according to a Labor Department report Friday that missed the median estimate of economists for a 130,000 gain. Total nonfarm payrolls climbed a below-forecast 136,000, which was boosted by 1,000 temporary government workers to prepare for the 2020 Census count. 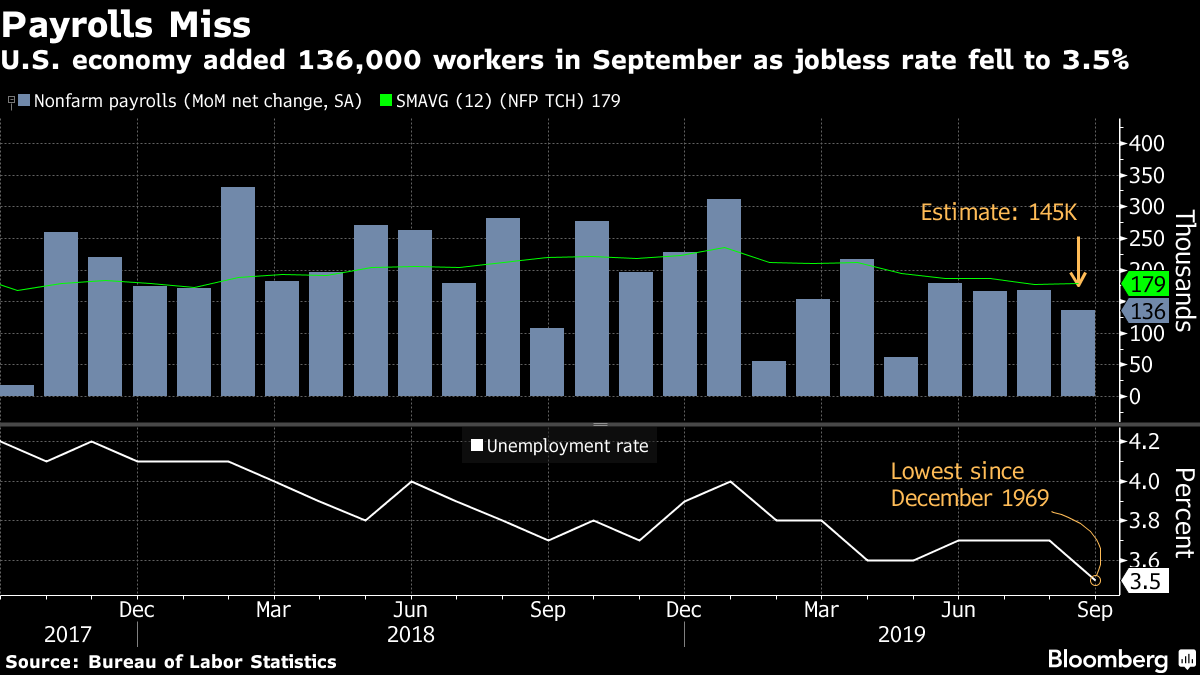 Average hourly earnings rose 2.9 per cent from a year earlier, the weakest in more than a year and missing estimates. The jobless rate unexpectedly dropped to 3.5 per cent, the lowest since December 1969, from 3.7 per cent.

Even with the shaky jobs and wage figures, traders of fed funds futures slightly reduced the amount of easing they expect from the U.S. central bank this year and marginally trimmed their expectations for an October cut amid a lower-than-expected unemployment rate. U.S. stocks rose and two-year Treasuries fell, while the dollar remained lower.

“Overall it is a bit of a mixed bag,” Torsten Slok, Deutsche Bank Securities chief economist, said on Bloomberg Television. But the main payrolls number along with weakness in manufacturing add to signs that the trade war is putting “downward pressure both on hiring and the economy.”

More broadly, the downbeat reading adds to signs President Donald Trump’s trade policy and weakness abroad pose an increasing threat to growth in the world’s largest economy. At the same time, the unemployment rate decline gave him a chance to boast, which he promptly did on Twitter minutes after the report, and was soon echoed by his economic adviser.

“There’s a lot of good data out there, and there’s some soft data,” Larry Kudlow, the head of the National Economic Council, said in a Bloomberg Television interview. “The headline number here is the 3.5 per cent unemployment rate,” he said, citing gains by African Americans, Hispanics, and those without high school degrees.

The jobs report caps a week of U.S. economic data that whipsawed stocks and sent already-low Treasury yields tumbling, led by a key manufacturing gauge that sank deeper into contraction with the worst reading in a decade. A slowdown also threatens Trump’s re-election prospects next year, with the president frequently staking his message on a strong economy.

The data offer a contrast with characterizations by Fed Chairman Jerome Powell and his colleagues at recent meetings that job gains have been “solid,’’ though they may still have room to stick with that assessment. Late Thursday, Fed Vice Chairman Richard Clarida said the economy remains on solid footing and recession risks aren’t “particularly elevated under appropriate monetary policy.”

Powell is scheduled to deliver opening remarks at 2 p.m. in Washington at a Fed event, followed by comments from governors Lael Brainard and Randal Quarles.

The job gains were concentrated in health care and professional and business services. Retail employment contracted for an eighth-straight month, while construction payroll growth remained tepid.

Manufacturers subtracted 2,000 jobs, continuing a trend toward weaker growth. It likely reflects the slowdown at factories, seen also in data from the Institute for Supply Management, which points to slower production and orders amid weakening demand for goods.

Factory employment may be poised to fall further in coming months with General Motors Co. workers on strike. About 46,000 employees walked out Sept. 15, which was too late in the month to be captured in the Labor Department’s survey though may affect readings for October. At the same time, the strike may already be impacting wages and hours worked.

Average hourly earnings were little changed from the prior month, missing estimates for a gain, while the 2.9 per cent annual wage gain fell below all estimates in Bloomberg’s survey of economists. Pay for production and nonsupervisory workers held up, though, with a gain of 3.5 per cent, down only slightly from a decade-high of 3.6 per cent. 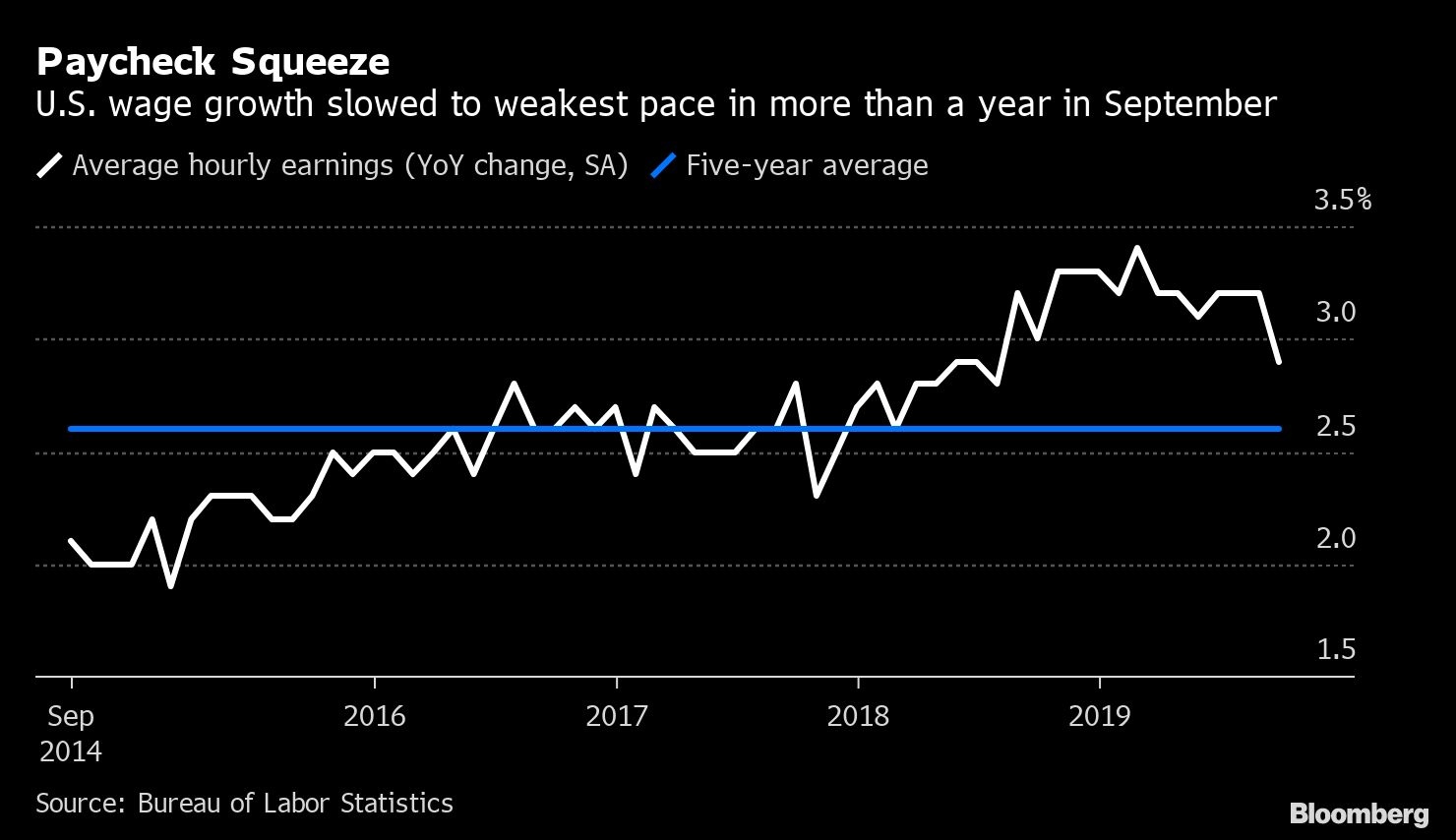 The U-6, or underemployment rate, slipped to 6.9 per cent, the lowest since 2000, from 7.2 per cent. Some analysts see this as a more accurate reflection of the labor market as it includes part-time workers who’d prefer a full-time position and those who aren’t actively looking.

Economists surveyed by Bloomberg had projected 145,000 new jobs with the unemployment rate remaining at 3.7 per cent and average hourly earnings rising an unchanged 3.2 per cent.