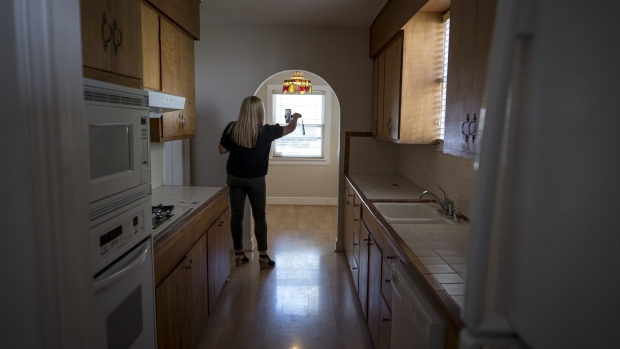 A realtor wearing a protective mask uses a smartphone to provide a virtual video tour of a home for sale in Sacramento, California. , Bloomberg

The National Association of Realtors’ index of pending home sales increased 7.5% from a month earlier to 125.2, according to data released Monday. The median estimate in a Bloomberg survey of economists called for a 1% advance.

Low mortgage rates and solid job growth have supported housing demand this year as pandemic-weary buyers seek more spacious accommodations. Existing home sales are on track to exceed 6 million in 2021, which would be the strongest in 15 years, Lawrence Yun, NAR’s chief economist, said.

Still, competition over a scant number of listings -- particularly on the lower, more affordable end of the resale market -- has pushed prices out of reach for many prospective buyers. Builders have struggled to fill the void as supply-chain delays and labor shortages upend construction schedules, exacerbating the inventory crunch.

“Motivated by fast-rising rents and the anticipated increase in mortgage rates, consumers that are on strong financial footing are signing contracts to purchase a home sooner rather than later,” Yun said in a statement. “This solid buying is a testament to demand still being relatively high, as it is occurring during a time when inventory is still markedly low.”

Contract signings increased across all four regions, led by an 11.8% gain in the Midwest and a 8% rise in the South.

Compared with a year earlier, contract signings were down 4.7% on an unadjusted basis.

Pending home sales are often looked to as a leading indicator of existing-home purchases given properties typically go under contract a month or two before they’re sold.