U.S. personal incomes soared in March by the most in monthly records back to 1946, powered by a third round of pandemic-relief checks that also sparked a sharp gain in spending.

The 21.1 per cent surge in incomes followed a 7 per cent decline in February, Commerce Department figures showed Friday. Purchases of goods and services, meanwhile, increased 4.2 per cent last month, the most since June. 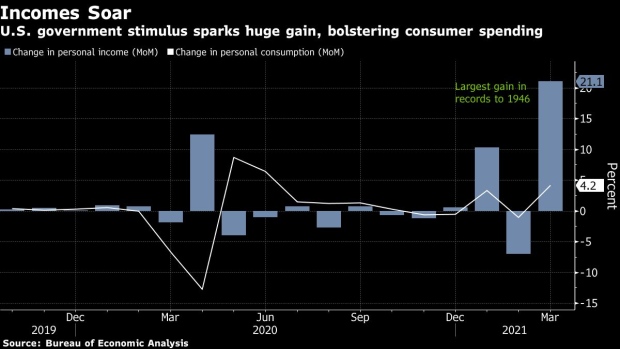 The increase in personal spending and incomes provides the economy a solid hand off heading into the second quarter after a robust pace of growth at the start of the year.

Economists projected a 20.3 per cent jump in incomes and a 4.1 per cent gain in personal outlays, according the Bloomberg survey medians.

The March data showed transfer receipts that include stimulus checks and unemployment aid nearly doubled from a month earlier to nearly US$8.2 trillion. Wages, meanwhile, rose modestly in March.

Inflation-adjusted personal spending increased 3.6 per cent in March after a 1.2 per cent drop a month earlier. Goods outlays climbed 7.3 per cent, while spending on services rose 1.7 per cent.

The personal savings rate jumped to 27.6 per cent from 13.9 per cent in February. Disposable income, which exclude taxes and are adjusted for inflation surged 23 per cent in March.

A separate report on Thursday showed that gross domestic product expanded at a 6.4 per cent annualized rate in the first quarter, driven by the second-fastest pace of personal consumption since the 1960s.

With spending on the rise, more cash in people’s bank accounts and vaccinations driving reopenings, economic growth is poised to further accelerate in the coming months.

The agency’s key measure of consumer prices, known as the personal consumption expenditure price index, that the Federal Reserve officially uses for its target rose 2.3 per cent in March from a year earlier, the biggest gain since 2018. The so-called core PCE price index, which excludes volatile food and energy costs, climbed 1.8 per cent after a 1.4 per cent gain in February.

Inflation metrics are being temporarily impacted by so-called “base effects.” Year-over-year increases in the price metrics appear large because they are being compared to the very weak inflation prints seen at the start of the pandemic.

Inflation has been a contentious topic among economists, lawmakers and Wall Street, especially in the wake of the latest stimulus package as well as Biden’s two infrastructure proposals that would total about US$4 trillion.

Fed officials anticipate that any surge in prices will prove temporary, but others point out that pent-up demand, rising materials costs and more federal spending could lead to sustained price pressures.

Speaking after the latest Federal Open Market Committee meeting on Wednesday, Fed Chair Jerome Powell noted that 12-month measures of inflation are likely to move “well above” 2 per cent over the next few months, but the effects will “disappear” in the months after April and May.

“During this time of reopening, we are likely to see some upward pressure on prices,” Powell said. “An episode of one-time price increases, as the economy reopens, is not the same thing as -- and is not likely to lead to persistently higher year-over-year inflation into the future -- inflation at levels that are not consistent with our goal of 2 per cent inflation over time.”