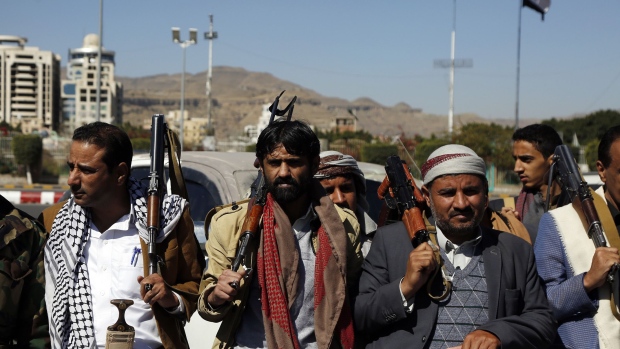 (Bloomberg) -- The U.S. plans to revoke the terrorist designations on Yemen’s Houthi rebels that were put in place in the final months of the Trump administration, the State Department said on Friday night.

The decision, which was reported earlier by Reuters, came as President Joe Biden has been reversing and halting many of the foreign policy initiatives of former President Donald Trump.

The department said that the terrorist designations were being revoked on humanitarian grounds.

The Houthis, who are aligned with Iran, have been battling Yemen’s United Nations-recognized government since 2014. A Saudi Arabian-led coalition intervened the following year on the side of the government. The UN has called the conflict -- in which tens of thousands of people have died -- the world’s worst humanitarian crisis.

The U.S. classified the Houthis as a foreign terrorist organization in November, shortly after the American presidential election, following a series of attacks on oil tankers in the Red Sea.

The State Department acknowledged that Ansarallah, the official name of the Houthi movement, had been responsible for attacks on civilians and the abduction of Americans but that the dire situation in Yemen justified the revocation. The UN warned in November that famine might take hold in the country.

Both the Houthis, who are from north of Yemen, and the government have been accused of restricting relief operations.

The department said Secretary of State Antony Blinken had notified Congress of the decision.

The Biden administration is also ending American support for offensive operations in Yemen, following an earlier decision to pause the sale of smart-bomb technology to Saudi Arabia, which has been widely criticized for how it has been conducting the war. The administration is appointing a special envoy to Yemen charged with helping end the civil war.