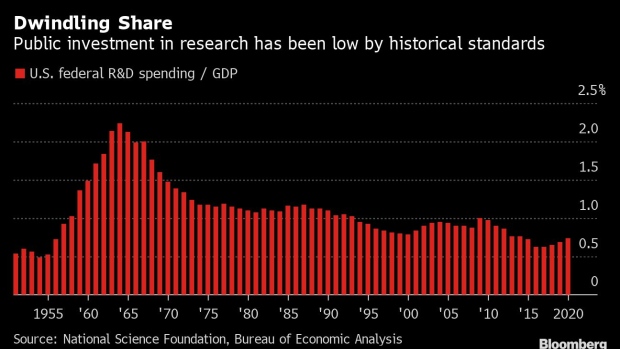 (Bloomberg) -- Faced with a high-tech challenge from a rival superpower, the U.S. government reaches for its wallet.That’s what happened some 60 years ago, after the Soviet Union edged ahead in the space race by launching the Sputnik satellite –- spurring a wave of U.S. spending on science and innovation. Something similar may be under way now, when the challenge comes from China.

Federal money for research and development, as a share of the economy, has been at historically low levels. But President Joe Biden has made support for innovation a key part of his program, calling for increased funding to key industries like semiconductor manufacturing, cybersecurity and electric vehicles.

And Congress is moving toward a wide-ranging plan, with backing in both parties, that could inject about $190 billion into new and existing programs, though some of that replaces current funding. It targets areas like artificial intelligence where China is committed to becoming a world leader –- through the kind of focused, government-led program that the U.S. is now moving to emulate.“We are at a Sputnik moment now,” said Walter Copan, former director of the National Institute of Standards and Technology. “China has demonstrated the benefits of having an innovation policy, an industrialization policy and a science and technology policy.”

China has risen up the rankings of the Bloomberg Innovation Index in recent years while the U.S. lost ground, and the gap between their research budgets has narrowed.

U.S. government spending on R&D last fiscal year was $150.9 billion, according to the National Science Foundation. That’s about 0.7% of a gross domestic product that was unusually small because of the pandemic.By comparison, spending peaked at 2.2% of GDP in 1964 – seven years after the Sputnik launch. Many breakthroughs of subsequent decades, from putting a man on the moon to mapping the human genome and developing the Internet, had roots in that era’s research.

Superpower competition isn’t the only reason behind today’s growing consensus that the U.S. government needs to play a greater role in innovation.The pandemic just provided a great example of how publicly funded research delivers benefits. Pfizer Inc. and Moderna Inc. were able to develop vaccines within months partly because they could build on years of work by government agencies or state universities.

Plenty of other cutting-edge technologies, from cancer-fighting medicines to the Google search engine, all had their start at U.S. universities –- which also stand to get extra research cash under the congressional plans.Climate change, too, poses threats that companies aren’t equipped to handle alone. One area where Congress wants to boost research funding, for example, is so-called precision agriculture -– which helps farmers use climate models and satellite data to determine where, when and what to plant.More broadly, there’s been a major rethink in an economics profession that’s now more inclined to recognize the benefits of government intervention -- after several decades when free markets were expected to solve most problems. That shift is reflected in Biden’s team.“Public support for research and development is essential to achieving an appropriate level of innovation,” his Council of Economic Advisers said last month in a paper outlining Biden’s $4 trillion plans. “Yet, for the past half century, the United States has been investing less and less.”

Some of the ideas –- such as more money for regional technology centers and underfunded universities including historically black colleges -– could help spread resources beyond the coastal hubs where venture-capital dollars are concentrated. That helps mesh the innovation agenda with other Biden priorities like reducing inequality.“The U.S. would be more competitive globally if we took advantage of everyone who has the talent and inclination to invent,” said Holly Fechner, executive director of Invent Together, a group funded by businesses and universities that works to address the lack of diversity in patenting and innovation.

On the GOP side, it’s the prospect of China overtaking the U.S. as the world’s biggest economy –- and gaining an edge over strategic technologies –- that has catalyzed support. It’s helped override a traditional skepticism about public spending.

Indiana Republican Senator Todd Young co-sponsored the Senate legislation along with Majority Leader Chuck Schumer from New York. Officially named the Endless Frontier Act -- after a seminal 1945 report that led to the creation of the National Science Foundation and ushered in an age of discovery –- it’s been combined with other proposals in an umbrella measure that’s become known in shorthand as the “China Bill.”

“The government should lead in areas of basic or applied research and development where technologies are far away from wide commercial adoption and the national payoff on investment is high,” Young said in response to questions. “The private sector is pursuing returns for its investors and growth for their respective companies and does not view geopolitical competition with China as something to be pursued in the same way the government does.”

Under former President Donald Trump, tariffs and other punitive measures were the key weapons in that competition. The new push is, in part, a recognition that Trump’s trade war did little to slow China down -- and nothing to push America forward.

“If we’re running a marathon with China, you can trip them and sure, they’ll stumble,” said Alexander Kersten, director of the Renewing American Innovation Program at the Center for Strategic and International Studies. “But if they’re the better runner, they’ll get up and beat you.”

On their own, the current raft of measures may not be big enough to win that race. Even if everything is approved, research spending would be well short of its 1960s peak.

And fiscal conservatives in Congress may yet shrink the plans. GOP Senator John Kennedy from Louisiana last week labeled the Senate measure the “Endless Spending Act” and complained that it would add to budget deficits without boosting U.S. competitiveness with China.There’s also a fight brewing over a National Institute of Standards and Technology proposal, dating back to the Trump administration, that would block the government from controlling the prices of products developed out of publicly funded research. While supporters say it just enshrines long-standing policy, activists argue it would give away leverage that could be used to lower drug prices, for example.Still, the fact that both parties are finding reasons to back government-funded research amounts to a changed landscape, according to Robert Atkinson, president of the Information Technology and Innovation Foundation.

“We’re doing a lot more than anybody would have envisioned four or five years ago,” he said. “You need more places to drive innovation to make the country work.”