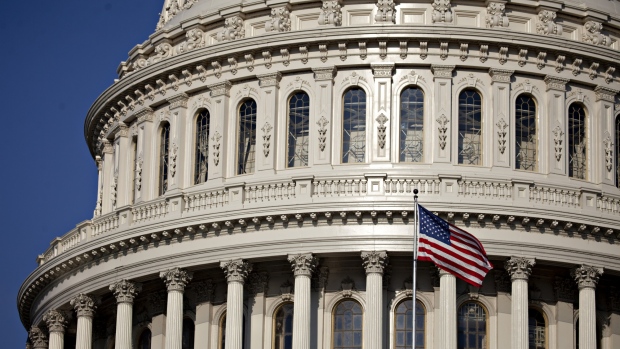 The U.S. Capitol stands in Washington, D.C., U.S., on Wednesday, Sept. 4, 2019. U.S. House Speaker Nancy Pelosi said in a statement today that the The House will move forward with a Hong Kong human rights bill. , Bloomberg

(Bloomberg) -- The U.S. budget deficit surpassed $1 trillion in the first 11 months of the fiscal year through August, according to data from the Treasury Department, though it’s likely the year-end deficit could narrow from a tax revenue bump.

September, the final month of the fiscal year, typically produces a surplus because quarterly tax payments are due. The Congressional Budget Office has estimated that the 2019 budget deficit will be $960 billion.

Since Oct. 1, the budget gap rose by about 19% to $1.07 trillion, according to the Treasury Department’s monthly budget report released Thursday. The comparable deficit a year earlier was $898.1 billion.

The budget received a nudge from customs duties, which surged to $64 billion in the fiscal year-to-date from $36.7 billion a year earlier, reflecting the Trump administration’s tariffs on Chinese imports, steel and other goods. Even still, income from duties represents a small share of overall federal revenue.

Fiscal year to date, revenue rose 3% from a year earlier to $3.09 trillion. Outlays increased by 7% to $4.16 trillion, the figures showed.

Bloomberg News reported Thursday that Trump administration officials have discussed offering a limited trade agreement to China that would delay and even roll back some U.S. tariffs for the first time in exchange for Chinese commitments on intellectual property and agricultural purchases, citing people familiar with the matter. It’s still a preliminary proposal and President Donald Trump has yet to sign off.

The August monthly deficit was $200.3 billion -- smaller than the $214.1 billion deficit posted in August 2018, according to the Treasury’s figures.

To contact the reporter on this story: Sarah McGregor in Washington at smcgregor5@bloomberg.net

To contact the editors responsible for this story: Margaret Collins at mcollins45@bloomberg.net, Robert Jameson, Sarah McGregor