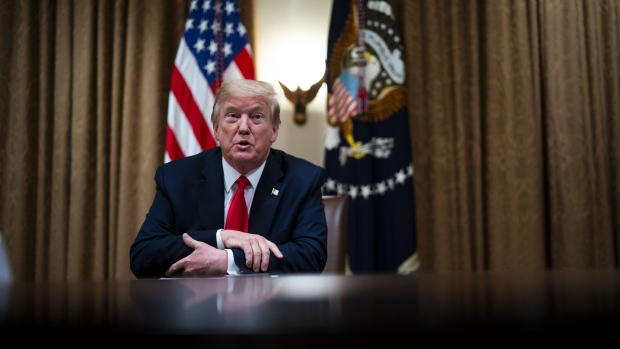 U.S. President Donald Trump speaks during a meeting with retail and lab testing executives in the Cabinet Room of the White House in Washington, D.C., U.S., on Monday, April 27, 2020. , Bloomberg

The U.S. government’s sweeping fiscal effort to contain the economic damage from the coronavirus pandemic came to light Tuesday in its monthly budget statement, with a record US$737.9 billion deficit in the month of April alone.

Two major government relief efforts pushed spending to almost US$980 billion, more than 2 1/2 times what it was a year ago, the Treasury Department’s report showed Tuesday.

Special payments to individuals and families totaled US$217 billion, while Medicare payments, grants to states and local governments and unemployment compensation also contributed to the spending surge.

April is typically a surplus month for the Treasury as income tax payments come due. Last year during the month, the U.S. had a USU$160.3 billion surplus. This year, however, receipts fell nearly 55 per cent compared with April 2019, to US$241.9 billion.

Payments to the government cratered as individual and corporate income taxes declined following the Trump Administration’s decision to push the tax-filing and payment deadline to July 15. 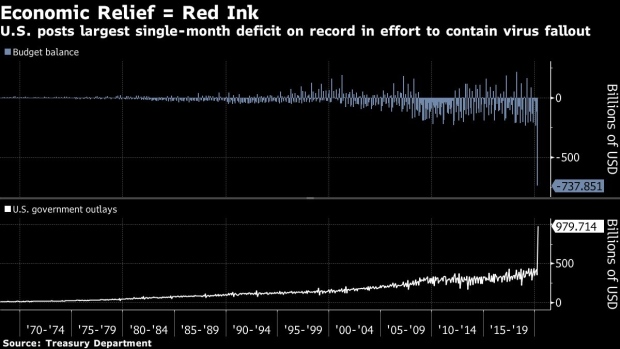 The disastrous fallout on the labor market from business closures and stay-at-home orders also caused a sizable hit to amounts withheld from workers’ paychecks. The economy lost 20.5 million jobs in April and the unemployment rate soared to 14.7 per cent, the highest since the Great Depression era of the 1930s.

In the first seven months of fiscal year 2020, the U.S. budget deficit was S$1.48 trillion, compared with US$530.9 billion at the same point last year. The Congressional Budget Office has estimated that the nation will have a shortfall of about US$3.7 trillion this fiscal year and US$2.1 trillion in 2021, assuming no major emergency funding is provided.

A deficit that size this year would bring federal debt held by the public to more than 100 per cent of gross domestic product from about 80 per cen at the end of last fiscal year. The shortfall would also be about 18   of GDP this year.