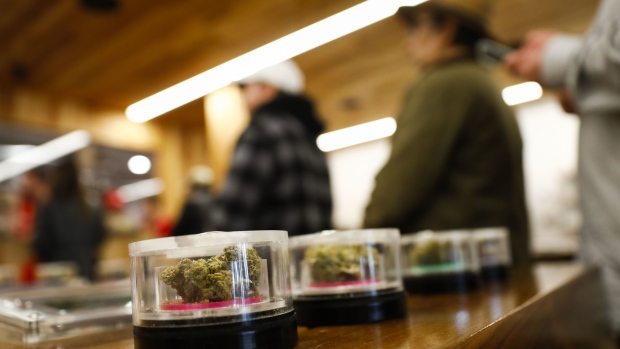 Marijuana is displayed for sale at the MedMen dispensary in West Hollywood, California, U.S., on Tuesday, Jan. 2, 2018. California launched legal marijuana Monday, and customers lined up to celebrate the historic moment in San Diego, Sacramento and Oakland -- some of the municipalities given the green light to start sales on January 1. Meantime, in Los Angeles and San Francisco, the state's first- and fourth-largest cities, customers were turned away empty handed. Photographer: Patrick T. Fallon/Bloomberg , Bloomberg

(Bloomberg) -- The U.S. cannabis industry had eagerly awaited a federal legalization bill that executives, investors and interest groups had hoped would be a panacea for the partisan divide over a hotly contested issue.

Cannabis stocks flagged after the bill was unveiled, and critics piled on from all directions. It’s not a surprise that the legislation wouldn’t please everyone, given the controversies around cannabis. Even the bill’s own authors acknowledge shortcomings, saying in a summary of the proposal that there’s still no standard to measure drugged driving, or research on how marijuana affects fetal health, and that limits their ability to be as comprehensive as they’d like. The plan is to fund more research on those and other topics, but that could take years.

Other omissions include basic measures to protect public health, according to Smart Action on Marijuana, a group that prefers decriminalization of marijuana possession rather than full legalization.

In a letter last week to Schumer and the bill’s other backers, the group’s scientific advisory board -- mostly academics or doctors specializing in health and addiction -- recommended that the bill put a cap on marijuana potency, a ban or severe limitations on advertising, and a ban on flavored products or goods that would be attractive to children. It should also propose ways to stop the tobacco and alcohol industry from monopolizing the market, Smart Action on Marijuana said.

“States that commercialized the drug are seeing rising rates of youth use, hospitalizations, poison center calls and other negative outcomes related to the drug,” the group said in the letter.

The United Food and Commercial Workers, the union that represents the most workers in the cannabis industry at about 10,000, also took issue with the legislation. It said more should be done to support good-paying cannabis jobs, and to stop the industry from moving high-wage union jobs from one state to low wage agricultural jobs in another. The union also seeks to increase research funding to support worker safety and apprenticeships.

Not everyone was pessimistic about the bill. It has many of the items sought by Democrats, which could make it harder to pass, but Cantor Fitzgerald analyst Pablo Zuanic said he sees areas where compromises could happen in the coming months to improve the bill’s prospects.

For instance, lawmakers could offer incentives to states for expungement or re-sentencing of past marijuana crimes. Or they could set limits on funds that flow to so-called “opportunity programs” to help disadvantaged communities, thereby freeing up dollars for other federal and state programs.

Zuanic said just having a U.S. Senate majority leader proposing broad marijuana reform is a victory for the industry overall. Compared to high-priority political projects like infrastructure, voting rights and climate change, marijuana may “prove less divisive in the end,” he wrote in a July 15 research note.

“I think the bill has a lot of questions -- more questions than answers. But it’s good to begin a dialogue,” said Green Thumb Industries Chief Executive Officer Ben Kovler in a phone interview about the new draft legalization bill.