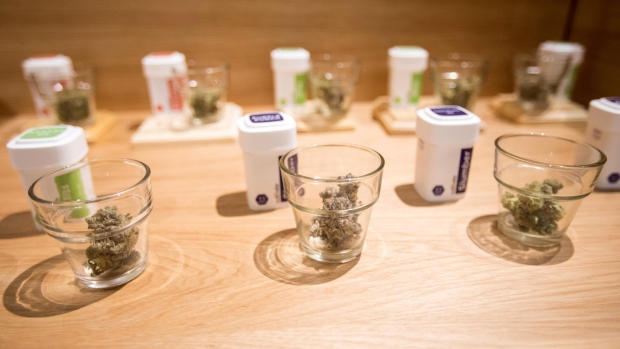 Various strands of marijuana are displayed on the first day of retail recreational sales at the Cultivate Holdings dispensary in Leicester, Massachusetts, U.S., on Tuesday, Nov. 20, 2018. Cultivate and New England Treatment Access, in Northampton received final regulatory approval Friday from the state Cannabis Control Commission to open this week. They will be the first commercial marijuana stores to operate in the eastern U.S. , Bloomberg

The flood of U.S. pot companies onto Canadian stock exchanges continued Friday, with DionyMed Holdings Inc. receiving conditional approval for its listing after raising $35 million in a private placement.

DionyMed, which owns cannabis brands and distribution platforms in California and Oregon, will have a market value of about $300 million, Chief Executive Officer Edward Fields said in an interview. He expects the company to generate US$70 million in revenue this year and US$197 million next year.

The firm plans to expand into other states following the recent midterm elections, which saw Michigan legalize recreational marijuana and a changing of the guard to a more pro-pot Congress. Cannabis remains illegal federally in the U.S.

“We’re quite optimistic about the improvement around banking issues and tax issues and compliance issues federally, and I think that’s part of the call to arms for expanding and having a true national footprint,” Fields said. “We are actively working on our expansion plans in Nevada, Massachusetts, Colorado and other cannabis-friendly markets.”

DionyMed will trade on the Canadian Securities Exchange via a reverse takeover under the ticker DYME. A date for the debut hasn’t been set. The CSE is the only exchange in Canada to allow listings of cannabis producers with U.S. operations. These firms raised a combined $1.5 billion on the exchange in the first 10 months of the year.