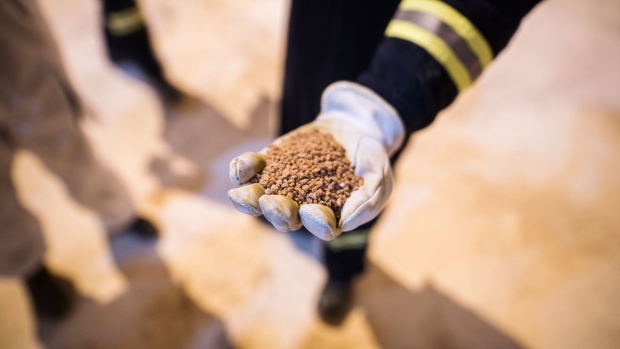 While Lukashenko hasn’t yet asked Russia for support, the Kremlin expects the Belarusian leader to make an approach for help with budget shortfalls caused by the ban on potash sales, according to two senior Russian officials with knowledge of the situation, who asked not to be identified as the information isn’t public. Any assistance is likely to be limited, they said.

“Lukashenko is being strangled” by the U.S. sanctions, said Tatiana Stanovaya, a political consultant and founder of R.Politik. Russian President Vladimir Putin “will use the situation to bind Lukashenko even more” closely to Russia, she said.

Potash is the only abundant natural resource in Belarus and international sales account for more than 7% of the country’s export income. After the U.S. sanctioned state-owned potash producer Belaruskali OAO, Lithuania said last week that it would halt shipments of the fertilizer from Feb. 1, shutting down a route used for virtually all of its exports. Belarus controls about a fifth of the global potash market, alongside other important producers including Russia and Canada.

While benchmark fertilizer prices in many regions, such as China and India, are derived from annual deals between producers and buyers, there are spot sales in other key markets like Brazil. Sanctions against Belarus helped Brazilian prices to more than double in the past year to $760 per ton in January.

The Belarusian leader has faced increasing U.S. and European Union pressure over his brutal crackdown on widespread protests following disputed presidential elections in 2020. Putin stood by his ally and has sought to capitalize on the crisis by pressing Lukashenko to accelerate economic and political integration between Russia and Belarus, which are in a so-called Union State.

“These sanctions are another argument for Lukashenko to receive support, benefits and money from Russia,” said Mikhail Vinogradov, head of the St. Petersburg Politics Foundation.

The penalties start to bite just as Belarus and Russia hold joint military exercises bordering North Atlantic Treaty Organization countries next month amid spiraling tensions with the West over Ukraine. The U.S. and Europe say a massive buildup of Russian forces near the border with Ukraine may be preparation for an invasion, which the Kremlin denies.

Lukashenko has also called a referendum in February on a revised constitution, after Putin urged an overhaul following the protests.

READ: Russia to Move Forces to Belarus for Military Drills Next Month

“Belarus is our partner. We don’t abandon it and we won’t abandon it,” Putin’s spokesman Dmitry Peskov told reporters last week, in response to a question on Lithuania’s decision to halt potash transit.

Lukashenko’s spokeswoman didn’t respond to requests for comment. While the president also hasn’t commented publicly on the potash issue, a group of his supporters have begun selling t-shirts with the logo “go and choke on those sanctions.”

Belarus will likely try to beat the sanctions by redirecting potash sales through Russia as the only viable channel for exports, said Artyom Shraibman, a Kyiv-based Belarusian political analyst. Russia may offer to buy supplies at below market price and re-sell it as Russian potash or consume Belarusian potash on its market while exporting more of its own production, he said.