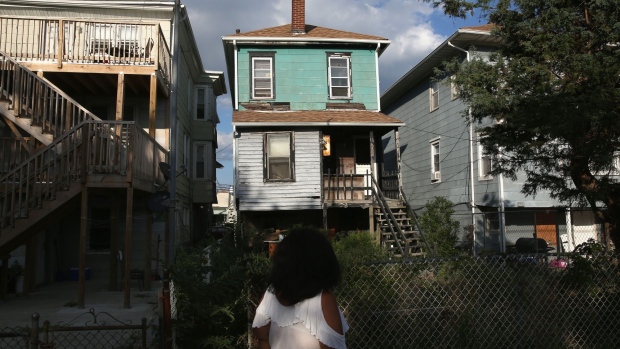 ATLANTIC CITY, NJ - AUGUST 26: Valencia Terrell looks to an abandoned foreclosed home on August 26, 2015 in Atlantic City, New Jersey. Terrell, worked in casino VIP services for years before her home was destroyed in Hurricane Sandy and she had to leave work to take care of family members. She now survives with the aid of food stamps and takes her family members to a soup kitchen for additional meals. After years of decline in Atlantic City, in 2014 some 8,000 people were layed-off when four of the city's major casinos closed, bringing Atlantic City's unemployment rate to more than 11 percent, double the national average. As unemployment assistance has begun to expire for many people, shelters like the Atlantic City Rescue Mission have seen a large jump in need. They serve upwards of 700 meals and house some 300 people a day, including many families. The mass unemployment has produced the highest foreclosure rate of any metropolitan U.S. area, with 1 out of 113 homes now in foreclosure in Atlantic County. (Photo by John Moore/Getty Images) Photographer: John Moore/Getty Images North America , Photographer: John Moore/Getty Images North America

(Bloomberg) -- U.S. household income fell in 2020 while the national poverty rate rose from a 60-year low as the Covid-19 pandemic upended the U.S. economy and threw millions out of work.

Median, inflation-adjusted household income decreased 2.9% last year to $67,500 according to annual data released Tuesday by the U.S. Census Bureau. The poverty rate rose to 11.4% after having dropped for five straight years and reaching the lowest since 1959 in 2019.

The data help flesh out the picture of American families’ economic health in 2020 amid a pandemic that caused the first annual economic contraction since 2009, put tens of millions out of work and exacerbated existing inequalities.

Lower-wage service-industry workers and people of color bore the brunt of job losses. The government’s stimulus checks and extra $600 a week in jobless benefits helped soften the blow, supporting incomes and spending amid widespread unemployment.

If not for government intervention, poverty would have been much higher, according to an analysis of real-time poverty data by James Sullivan at the University of Notre Dame’s Department of Economics and Bruce Meyer at the University of Chicago’s Harris School of Public Policy.

“For example, expanded unemployment insurance and the first round of stimulus checks prevented 12 million individuals from falling into poverty in the first few months of the pandemic,” they said.