Prices paid to U.S. producers rose more than expected in May, fuelling companies to raise prices on American consumers.

The producer price index for final demand increased 0.8 per cent from the prior month after a 0.6 per cent gain in April, according to data from the Labor Department Tuesday. Excluding volatile food and energy components, the so-called core PPI rose 0.7 per cent. 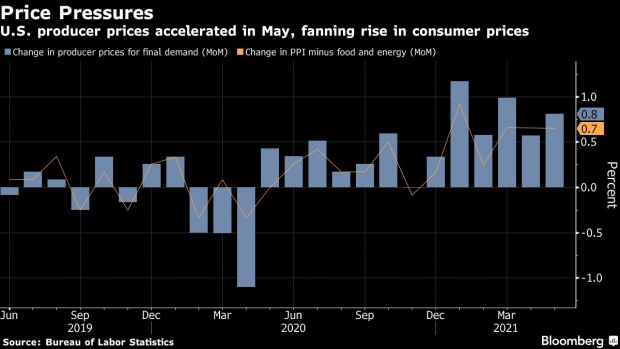 Federal Reserve officials have said the upward pressure on prices will likely prove temporary, but others worry recent price gains will lead to a more sustained pickup in inflation. A Bloomberg survey of economists called for a 0.5 per cent monthly gain in the overall measure and the same advance in the core figure.

Data out last week signaled businesses are successfully passing along at least some of the burden of higher costs along to consumers. The consumer price index advanced more than expected for a third straight month in May, extending a months-long buildup in inflation.

The annual advance in the overall PPI rose to a 6.6 per cent gain, a figure biased higher by the fact that it was compared to the soft reading seen in May of last year. The increase was the largest in data going back to 2010.

Almost 60 per cent of the May increase in the index for final demand can be traced to a 1.5 per cent advance in prices of goods. The costs of nonferrous metals, motor vehicles, and beef and veal all climbed.

Prices for services rose for a fifth straight month, with more than 40 per cent of the increase attributable to automobile-retailing margins, which surged 27.3 per cent.

Producer prices excluding food, energy, and trade services -- a measure often preferred by economists because it strips out the most volatile components -- advanced 0.7 per cent from the prior month and rose 5.3 per cent from a year earlier.