The producer price index for final demand increased 1 per cent in March from the prior month after a 0.5 per cent gain in February, the Labor Department said on Friday. The gain was twice the median projection in a Bloomberg survey of economists as cost increases for goods and services accelerated. 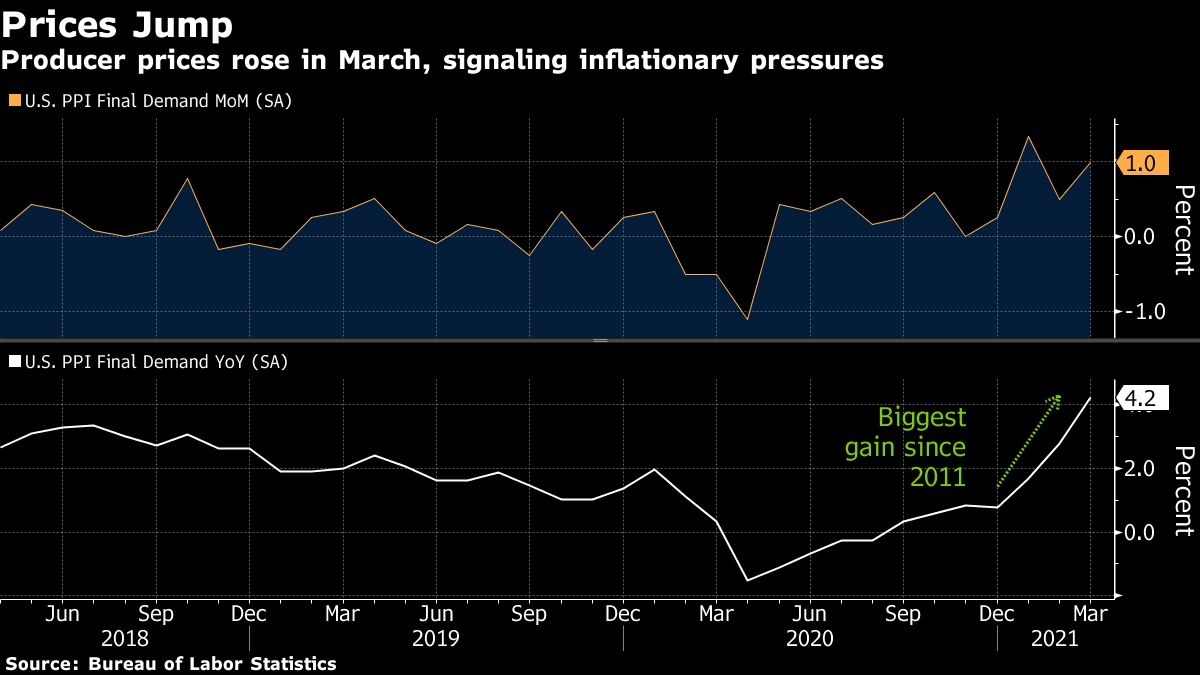 The data, typically scheduled for release at 8:30 a.m. New York time, was delayed on the government’s website. The agency is still investigating what went wrong, said Bureau of Labor Statistics economist Scott Sager. The S&P 500 was little changed in early trading and the yield on the benchmark 10-year Treasury note increased.

The monthly advance in the index led to a 4.2 per cent increase in the overall PPI from March 2020, when the pandemic caused prices to retreat. That was the sharpest annual gain since 2011.

Given major inflation metrics declined at the start of the pandemic, year-over-year figures will quickly accelerate -- a development referred to as the base effect. The upward distortion will also appear in the closely-watched consumer price index report on Tuesday.

Producer prices, which have the potential of being passed on to consumers, are rising at a brisk pace, adding fuel to an already-intense debate about the future path of inflation in the coming months.

The cost of goods climbed 1.7 per cent in March, the most in records to December 2009. More than 25 per cent of that gain was due to an 8.8 per cent spike in gasoline prices. Services costs climbed 0.7 per cent, the third straight gain and fueled by increased margins at retailers and wholesalers.

Shortages of materials have driven up input prices at the same time producers are contending with higher shipping costs and bottlenecks -- developments Federal Reserve policy makers view as delivering only a temporary boost to inflation.

Fed Chairman Jerome Powell, during a virtual panel on Thursday, said that while price pressures are expected to rise as the economy reopens, the pickup in inflation will likely be temporary.

“We would be monitoring inflation expectations very carefully. If we see them moving persistently and materially above levels we’re comfortable with, then we’d react to that,” Powell said.

Producer prices excluding food, energy, and trade services -- a measure often preferred by economists because it strips out the most volatile components -- rose 0.6 per cent in March from a month earlier and increased 3.1 per cent from the same period last year.

The Institute for Supply Management’s prices paid indexes for both manufacturers and service providers have surged to the highest since 2008 in recent months amid supply chain disruptions, limited availability of materials and surging input prices.

Some business executives have noted plans to raise consumer prices, which could drive up inflation measures like next week’s CPI. A surge in pent-up demand -- along with a massive injection of fiscal aid -- should support an acceleration in consumer prices, but it’s unclear whether price gains will be sustained.

But if none or only some of these price increases can be passed to consumers, pressure on profit margins could develop if firms have difficulty cutting costs elsewhere.