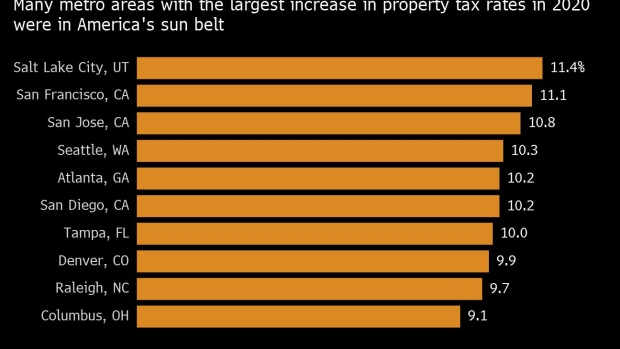 (Bloomberg) -- U. S. property taxes increased at the fastest pace for four years in 2020, with some of the steepest increases coming in traditionally low-cost Sun Belt states, according to figures from ATTOM Data Solutions.

The average tax on a single-family home climbed 4.4% to $3,719, double the rate of increase in 2019, according to the real estate analytics firm. Nationwide, property taxes levied by counties rose to $323 billion from $306.4 billion.

“The latest tax numbers speak loud and clear about the continuing pressure on both recent and longtime homeowners to support the rising cost of public services,” said Todd Teta, ATTOM’s chief product officer.

The traditionally high-tax states of the U.S. northeast remain the most expensive for property-owners. New Jersey, with an average charge on single-family homes of $9,196, topped the list followed by New York and New Hampshire.

But some of the biggest annual increases came in Sun Belt metro areas from Salt Lake City to Tampa, as they seek additional revenue to deal with an influx of new residents.