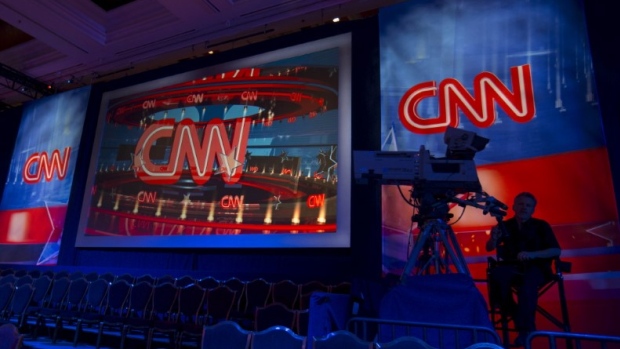 A CNN camera operator waits by his camera as the network prepares for the first democratic presidential candidate debate at the Wynn Hotel in Las Vegas, Nevada October 13, 2015. , Reuters

The unexpected move by the U.S. Department of Justice casts fresh doubt on the US$85.4 billion deal that was announced in October 2016. Shares of Time Warner closed down 6.5 per cent at US$88.54.

A Justice Department source told Reuters that AT&T had offered to divest just CNN, rather than the whole of Turner Broadcasting, but that the Justice Department's antitrust division, which is reviewing the deal, rejected the offer.

In a statement, AT&T Chief Executive Randall Stephenson denied that. "Throughout this process, I have never offered to sell CNN and have no intention of doing so."

AT&T is prepared to fight any divestitures required to win regulatory approval of the deal, according to sources familiar with the matter.

The deal has attracted political interest since its inception. U.S. President Donald Trump, a frequent critic of Time Warner's CNN, attacked the deal on the campaign trail last year, vowing that as president his Justice Department would block it.

No big worries in AT&T deal for Time Warner

We speak with antitrust expert Makan Delrahim, law professor at Pepperdine University in California, who says he doesn't see a major problem in AT&T's US$85-billion deal for Time Warner. Delrahim is a former chief counsel on the U.S. Senate Judiciary Committee and deputy assistant attorney general in the U.S. Justice Department.

The Justice Department's new demand is likely to complicate its continuing antitrust conversations with AT&T, which said on Wednesday it was now uncertain when the deal, announced in October 2016, would be completed. AT&T had previously said the acquisition would close by the end of this year.

The Justice Department could still file a lawsuit as early as this month to challenge the deal, sources familiar with the negotiations told Reuters.

The deal is opposed by an array of consumer groups and smaller television networks on the grounds that it would give AT&T too much power over the content it would distribute to its wireless customers.

The new concessions suggest the head of the Justice Department's antitrust division, Makan Delrahim, has changed his view of AT&T's plan to buy Time Warner, since giving an interview in 2016 where he declared it not "a major antitrust problem."

Delrahim was subsequently nominated by U.S. President Donald Trump to head the Justice Department's antitrust division and was confirmed in September. The Justice Department did not immediately respond to requests for comment on the matter. AT&T and the White House declined comment.

Another sticking point in discussions is the length of time that the U.S. government wants to impose conditions on what AT&T can and cannot do after a deal. Two people briefed on the talks told Reuters the government has sought as long as 10 years for such conditions while AT&T has pressed for a shorter period.

AT&T also said it would invest an additional US$1 billion in the United States next year if Trump signed into law the provisions in the current House of Representatives tax bill.

"By immediately lowering the corporate tax rate to 20 per cent, this bill will stimulate investment, job creation and economic growth in the United States," said Randall Stephenson, AT&T chief executive.