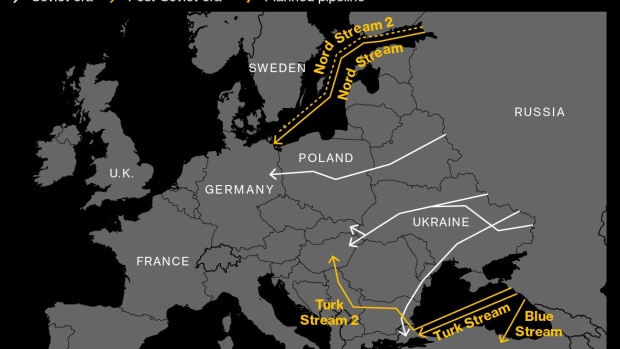 (Bloomberg) -- The U.S. is putting pressure on European allies to agree on potential sanctions against Russia, worried about slow progress despite weeks of talks and heightened concerns that President Vladimir Putin could soon invade Ukraine, said people familiar with discussions that have taken place this week.

The Biden administration has also discussed the range of possible actions by Moscow it believes should trigger retaliation, the people said. Aside from sending troops into Ukraine, it could include any effort to engineer a coup against Ukrainian president Volodymyr Zelenskiy or other acts to destabilize his government.

The talks between the U.S. and bigger European powers come as meetings this week with Russia failed to shed light on Moscow’s intentions. While Putin has denied he currently plans to invade Ukraine he is demanding security guarantees from NATO that the security alliance says it cannot deliver, and he’s continuing to build a massive troop presence on the border.

Presenting a united front on economic deterrence is a crucial lever in the attempts to steer Putin off military action, especially as there are no set dates for further discussions with Moscow. Russian officials stepped up their rhetoric on Thursday, with Deputy Foreign Minister Sergei Ryabkov saying the talks with Western nations were at “a dead end.” Those comments hit the ruble, which was the worst performer on the day against the dollar in emerging markets.

The U.S. prodding on sanctions underscores a growing sense of impatience in the Biden administration about the European stance. For one thing, American officials are unhappy that European nations haven’t agreed on the exact sanctions they’d roll out if Russia invades Ukraine. For another, the U.S. worries European leaders are ill-prepared to respond if Putin takes action that falls short of an all-out invasion, such as cyberattacks or stepped-up disinformation campaigns.

One person familiar with the U.S. position said European officials acknowledged at the NATO meetings this week they were poorly prepared to respond to a so-called “hybrid” attack by Russia, and wanted to know what the U.S. triggers for action were, and how it would ramp up its response. White House spokespeople had no immediate comment.

For months the U.S. and its European partners have been working on a package that could include measures targeting Russia’s largest banks and export controls on advanced technologies in key industries and high-tech goods.

Some big western European members of the European Union have raised questions about the impact some of the penalties under discussion could have on their own economies, according to people familiar with the discussions. That includes the potential that Putin responds by cutting off crucial gas supplies to Europe.

The allies are working through economic impact assessments and technical discussions about the proposed measures, and the Biden administration is looking at ways to mitigate the impact the sanctions might have on Europe’s energy supplies. European natural gas prices surged as much as 16% Thursday on the reality that Russia and the U.S. remain far from bridging their differences.

The strongest ideas on the table, such as cutting Russia off the Swift international payments system, are seen as a no-go for some countries. A number of European governments have also proposed carve-outs and introducing some financial measures gradually, two of the people told Bloomberg News.

The bulk of any EU-wide response would have to be unanimously agreed by all 27 member states. The hope, one person said, is that a package can be finalized when the bloc’s foreign ministers next meet on Jan. 24.