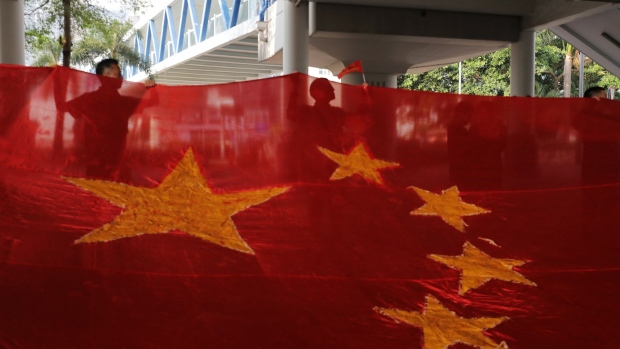 Pro-government supporters display a Chinese flag during a flash mob in the Central district of Hong Kong, China, on Tuesday, Oct. 1, 2019. , Paul Yeung/Bloomberg

The U.S. is preparing to sanction at least a dozen more Chinese officials over their role in the recent disqualification of Hong Kong legislators, according to two people familiar with the plans.

The latest round of sanctions over Hong Kong could be rolled out as soon as Monday, said the people, who asked not to be identified because the measures haven’t been formally announced. The move comes as President Donald Trump continues to pile pressure on China’s Xi Jinping and the ruling Communist Party in his final weeks in office.

While the names or positions of any of the potential targets weren’t immediately known, U.S. Secretary of State Michael Pompeo was expected to sign off on a list that included high-ranking officials. The Trump administration had previously declined to sanction any members of the Politburo’s supreme Standing Committee.

News that the U.S. was preparing sanctions on some Chinese officials helped sour the tone in global financial markets in Asian trading Monday morning, and futures on the S&P 500 Index slipped 0.2 per cent.

As many as 14 people were expected to be impacted, Reuters, which first reported the sanctions, said separately.

Chinese Foreign Ministry spokeswoman Hua Chunying said on Monday Beijing would take countermeasures should the U.S. continue down the “wrong path,” without elaborating.

“If the reports are true, I believe you can imagine China’s position,” Hua said. “We firmly oppose and strongly condemn U.S. interference in China’s internal affairs and sanctions on Chinese personnel under the pretext of Hong Kong. We have expressed our positions to the U.S. side many times and made legitimate and necessary responses.”

Hua spoke hours after Chinese Foreign Minister Wang Yi told the U.S.-China Business Council that Washington and Beijing should “work together” to “achieve a smooth transition” of their ties.

Beijing “could demand sanctions relief in exchange for concessions in future negotiations,” said Nicholas Turner, a lawyer who advises on sanctions at Steptoe and Johnson in Hong Kong. “It’s unlikely the Biden administration will roll back sanctions that are politically popular in Washington. Trump-era sanctions could become sticking points in the U.S.-China relationship for years to come.”

Their departure fueled concern about Hong Kong’s autonomy from Beijing in the wake of China-drafted national security legislation imposed on the former British colony in June. Prominent local activist Joshua Wong was also sentenced to more than a year in prison last week for leading a 2019 protest outside police headquarters, the latest in a series of moves by Chinese and local officials to clamp down on the city’s battered opposition.

The U.S. has already hit officials with sanctions over Beijing’s crackdown on dissent in Hong Kong, including the city’s Chief Executive Carrie Lam. Lam recently said she was collecting “piles of cash” at home as the measures barred her from basic banking services.

Trump indicated to aides in July that he did not want to further escalate tensions with China and had ruled out additional sanctions on top officials for now, Bloomberg News reported at the time. Before that, his team had created a list of officials that included Vice Premier Han Zheng, a member of the party’s powerful seven-member Politburo Standing Committee, Bloomberg said, citing people familiar with the matter who spoke on condition of anonymity.

An even more senior target would be National People’s Congress Chairman Li Zhanshu, the party’s No. 3 official and Xi’s former chief of staff. The legislative body led by Li has been directly responsible for China’s most controversial measures on Hong Kong in recent months, including the loyalty resolution.