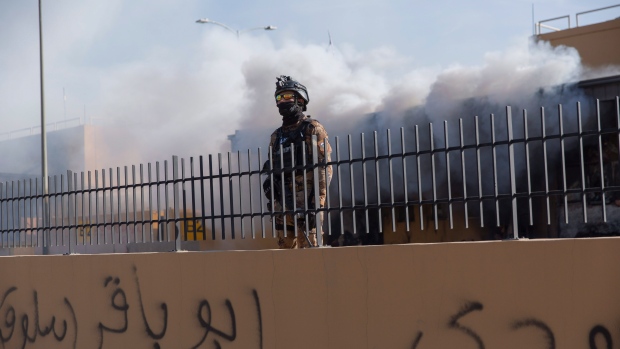 Iraqi army soldiers are deployed in front of the U.S. embassy, in Baghdad, Iraq, Wednesday, Jan. 1, 2020. , The Canadian Press

The U.S. is ready to deploy more force in Iraq if needed to defend or prevent more attacks by Iranian-backed militias, Pentagon leaders warned Thursday.

“We are prepared to exercise self-defense, and we are prepared to deter further bad behavior from these groups, all of which are sponsored and directed and resourced by Iran,” Defense Secretary Mark Esper told reporters Thursday.

Any further attacks on the U.S. embassy in Baghdad would be met with a “buzz saw,” General Mark Milley, chairman of the Joint Chiefs of staff added in a briefing at the Pentagon.

A rare direct U.S. assault on an Iran-backed militia in Iraq and its response -- an attack on the embassy before withdrawing Wednesday -- threatened to spiral into a broader confrontation. The U.S. and Iran are already facing off over the Trump administration’s crippling economic campaign against Tehran and suspected Iranian reprisals, and additional American forces were ordered to the region after the embassy attack.

Esper called on the Iraqi government to do more to confront the Iranian-backed militias. He said the U.S. is going beyond its previous stance of responding to attacks that harm American troops or citizens and will take preemptive measures to protect against further threats.

“There are some indications out there that they may be planning additional attacks. That’s nothing new,” Esper said. “If that happens, then we will act and, by the way, if we get word of an attack of some kind of indication, we would take pre-emptive action as well to protect American forces, American lives -- the game has changed.”

While President Donald Trump has called for withdrawing U.S. troops from entanglements abroad, deployments have climbed in recent months to more than 60,000 in the region that stretches from Kuwait to Afghanistan.

Esper said the public shouldn’t see the dispatch this week of troops from the Army’s 82nd Airborne “ready battalion” as portending a major increase in personnel in the region.

“I just spoke to the commander” of U.S. Forces in Iraq “just yesterday “about his readiness,” Esper said. “He feels he’s in good shape,” but “we will deploy more forces as needed in anticipation of what may come.”

Esper said the deployment of the 82nd Airborne is an example of the “Dynamic Force Employment” called for in the administration’s National Defense Strategy.

“We are able to use forces as we need them and then redeploy them because we have to get much more nimble operationally,” he said.