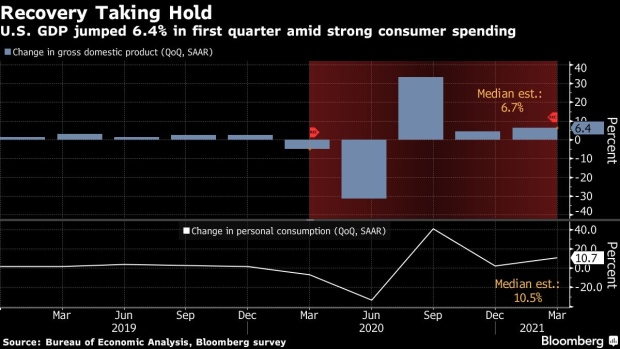 The take-out only food court in the re-opened Anderson Mall in Anderson, South Carolina, on April 24, 2020. Photographer: Dustin Chambers/Bloomberg , Bloomberg

(Bloomberg) -- The U.S.’s Covid-19-induced recession ended in April 2020 after two months, making it the nation’s shortest downturn on record, according to the academic panel that serves as arbiter of U.S. expansion dates.

All key indicators of employment and production “point clearly to April 2020 as the month of the trough” in business activity, the National Bureau of Economic Research’s business cycle dating committee said in a statement Monday.

The downturn followed a 10 1/2-year expansion that was the longest in historical records going back to 1854, with the shortest prior recession being six months in 1980.

The panel’s decision reflects data including employment and consumer spending showing the U.S. economy recovering since the spring of 2020, when the country was reeling from the sudden loss of 22 million jobs.

Record fiscal stimulus, Federal Reserve monetary easing and an accelerated program of vaccinations have led America to outperform most of the world this year, with 2021 growth forecast to be the strongest in more than three decades.

“History will remember this event as very bad, even if the fall in the economic output and employment were limited to two months,” Jeffrey Frankel, a Harvard University economist who served for more than a decade on the committee through 2019, said before the NBER announcement.

“It took aggressive fiscal and monetary easing to achieve the economic turnaround. The episode will be most remembered as an example of how useful active macroeconomic management can be, if it is well-timed and of appropriate scale.”

Even as the U.S. economy recovers at a fast clip, the unemployment rate isn’t likely to approach February 2020’s level of 3.5%, a 50-year low, until 2023, according to Federal Reserve policy makers. Central bankers are projecting their first interest rate hike from near zero in 2023.

Fiscal stimulus, including the most recent $1.9 trillion Covid-19 relief bill approved under President Joe Biden, is “on the scale of rearmament before Pearl Harbor in 1940-41,” Robert Gordon, an economist at Northwestern University and member of the NBER committee, said before the announcement. That yielded 12% annual growth, he said.

“Rapid growth in 2021 is made possible not only by the fiscal stimulus with monetary accommodation, but also by the inherently temporary nature of the shutdown of travel, hospitality, and parts of retail due to the fear of virus contagion,” he said.

Employment has regained about two-thirds of the lost jobs but remains about 7 million below the pre-pandemic peak as of June. Fed Chair Jerome Powell has said the current unemployment rate provides an incomplete picture of the progress on the health of the job market because many workers remain sidelined for a variety of reasons, including health concerns and mothers at home with children who are home from school.

The shortest previous recession lasted six months in 1980 and was followed by a second recession a year later when the Fed, then led by Paul Volcker, was fighting rampant inflation by keeping interest rates high.

The Covid-19 recession was similar to 1980 as “a short and deliberate turning-off of aggregate demand, which reversed quickly as soon as the exogenous factor that was holding spending back was removed,” said Michael Feroli, JPMorgan Chase & Co. chief U.S. economist. “It will be seen as a victory for economic policy makers.”

Economic forecasts this year have consistently surprised to the upside, as a number of U.S. forecasters worried that a winter wave of Covid cases would not only dampen economic activity but might cause a contraction in growth in the first quarter, if not a second recession.

“If strong rehiring trends are maintained the long-term damage done by prolonged joblessness can be minimized,” said Andrew Hollenhorst, chief U.S. economist at Citigroup Inc. “There is a good chance that relatively low unemployment, close to levels that have historically been considered full-employment will be reached by the end of 2021 and that historically low unemployment as was experienced pre-pandemic is attained in 2022.”

The 2020 recession followed the longest expansion in U.S. history, lasting 128 months and starting in the wake of the 2007-09 recession sparked by the housing bust.

Many economists informally define a recession as two negative quarters of gross domestic product. The bureau doesn’t use that definition and instead looks for a significant decline in economic activity, typically lasting more than a few months. In the case of the latest downturn, the depth of the decline outweighed its brevity.