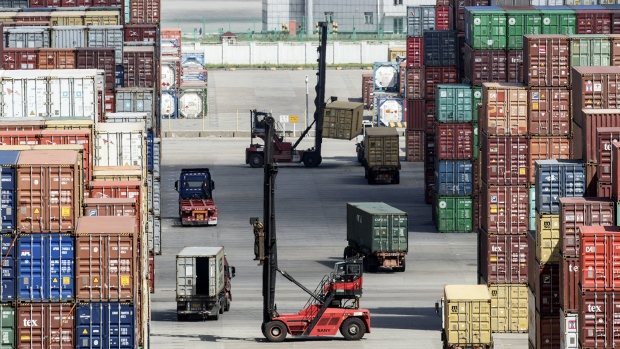 Trucks and forklifts operate as containers sit stacked at the Yangshan Deep Water Port in Shanghai, China, on Tuesday, July 10, 2018. China told companies to boost imports of goods from soybeans to seafood and automobiles from countries other than the U.S. after trade tensions between the world's two biggest economies escalated into a tariff war last week. , Photographer: Qilai Shen/Bloomberg

(Bloomberg) -- Welcome to Monday, Asia. Here’s the latest news and analysis from Bloomberg Economics to help get your day started:

To contact the reporter on this story: Chris Bourke in Sydney at cbourke4@bloomberg.net

To contact the editors responsible for this story: Nasreen Seria at nseria@bloomberg.net, Tracy Withers