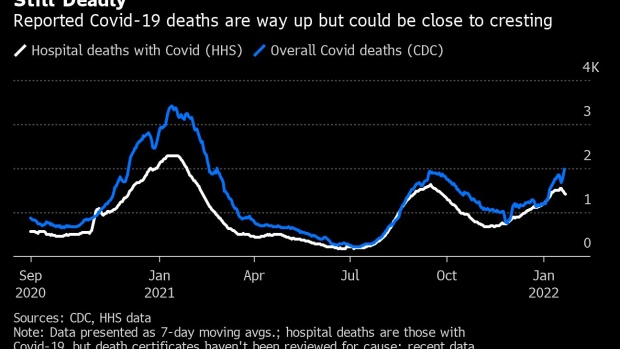 (Bloomberg) -- The U.S. is reporting the most Covid-19 deaths in about 11 months, but cases and hospitalizations indicate that the nation may be turning a corner.

The seven-day average of reported Covid-19 deaths reached 1,975 on Friday, the most since Feb. 25, according to data from the Centers for Disease Control and Prevention. During the winter peak of January 2021, the daily fatality average topped 3,400.

Deaths typically lag behind cases and hospitalizations, and there are indications that the fatalities, like infections, may soon be peaking if they haven’t already in parts of the U.S. Deaths with Covid-19 in U.S. hospitals -- a related indicator with less latency -- show fatalities may have crested nationally in recent days.

The omicron variant brought unprecedented transmissibility to the U.S., with average daily cases reaching nearly 800,000 this month -- more than triple last winter’s peak. For health-care systems, that surge in infected people partially offset the generally less severe characteristics of the variant itself.

Unlike some other parts of the world, omicron also arrived when the U.S. was already in the throes of a dangerous battle with the delta variant.

The hospital deaths metric isn’t based on the same standard as official Covid-19 deaths -- death certificates haven’t been reviewed for causes -- and it excludes deaths outside of the health-care system. But the official Covid death data are often subject to reporting-related delays, and the hospital statistic has shown to be a reliable indicator of reversals in trend.

There are other signs that conditions are on the verge of improving. The seven-day average of new cases has been declining nationwide since mid-month, and the downtrend is even steeper in some of the first cities to get hit, including New York. New hospital admissions with confirmed Covid-19 appear to have crested around the same time.

Even so, both admissions and cases remain well above the early-2021 peak.