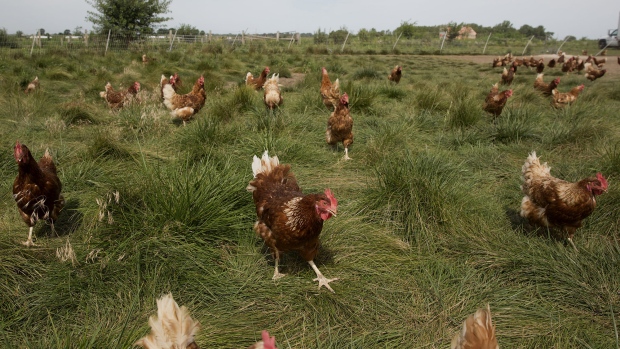 Chickens walk around outside a barn at a certified organic farm in Sheffield, Illinois. , Photographer: Daniel Acker/Bloomberg

Plant shutdowns are leaving the U.S. dangerously close to meat shortages as coronavirus outbreaks now spread to suppliers across the Americas.

Almost a third of U.S. pork capacity is down, the first big poultry plants closed on Friday and experts are warning that domestic shortages are just weeks away. Brazil, the world’s No. 1 shipper of chicken and beef, saw its first major closure with the halt of a poultry plant owned by JBS SA, the world’s biggest meat company. Key operations are also down in Canada, the latest being a British Columbia poultry plant.

While hundreds of plants in the Americas are still running, the staggering acceleration of supply disruptions is now raising questions over global shortfalls. Taken together, the U.S., Brazil and Canada account for about 65 per cent of world meat trade.

“It’s absolutely unprecedented,” said Brett Stuart, president of Denver-based consulting firm Global AgriTrends. “It’s a lose-lose situation where we have producers at the risk of losing everything and consumers at the risk of paying higher prices. Restaurants in a week could be out of fresh ground beef.” 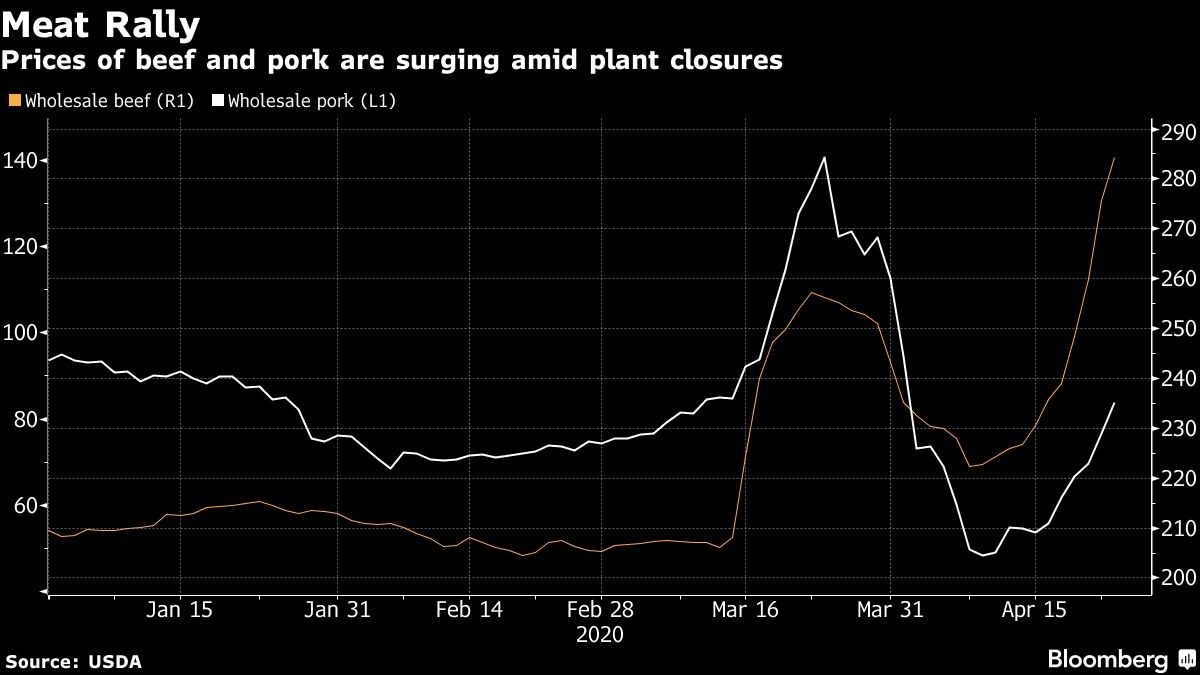 New U.S. shutdowns are hitting at a dizzying rate. Smithfield Foods Inc., the world’s No. 1 pork producer, said Friday it was closing another operation, this one in Illinois. That news hit less than an hour after Hormel Foods Corp. said it was idling two of its Jennie-O turkey plants in Minnesota. A big hog-slaughter facility in Indiana is also shutting. Friday’s news added to a flurry of other halts announced in the space of just a few weeks.

“During this pandemic, our entire industry is faced with an impossible choice: continue to operate to sustain our nation’s food supply or shutter in an attempt to entirely insulate our employees from risk,” Smithfield said in a statement Friday. “It’s an awful choice; it’s not one we wish on anyone.”

Prices are surging. U.S. wholesale beef touched a record this week, and wholesale pork soared 29 per cent, the biggest weekly gain since 2012.

Jersey Mike’s Franchise Systems Inc., which has 1,750 stores across the U.S., is working with its ham supplier Clemens Food Group to ensure its supply of pork, something they sell quite a bit of in their sub sandwiches.

“We’re backing it up already because of the coming — we feel — the coming shortages,” said Peter Cancro, chief executive officer.

To be sure, some plants have restarted after testing workers and improving conditions, and most Brazilian facilities are still operating. Another point to consider: There haven’t yet been big shutdowns in Europe. The European Union accounts for about a fifth of global meat exports, U.S. government data show.

Still, executives from Tyson Foods Inc., JBS and Smithfield have all warned that consumers are likely to see impact at the grocery store.

It should be noted that the output from a plant where infection pops up doesn’t pose health concerns because by all accounts Covid-19 isn’t a food-borne illness. Products from a farm or a production plant with a confirmed case can still be sent out for distribution. But a production halt means that there’s no new supplies.

And these shutdowns are happening at a time when global meat supplies were already tight. China, the world’s top hog producer, has been battling an outbreak of African Swine Fever, which destroyed millions of the country’s pigs. Plus the virus is hitting supply at a time when some meat companies had already taken steps to slow output because of the closure of restaurants around the world.

Inventories can provide some cushion, though they may not last long.

Total American meat supplies in cold-storage facilities are equal to roughly two weeks of production. With most plant shutdowns lasting about 14 days for safety reasons, that further underscores the potential for deficits. 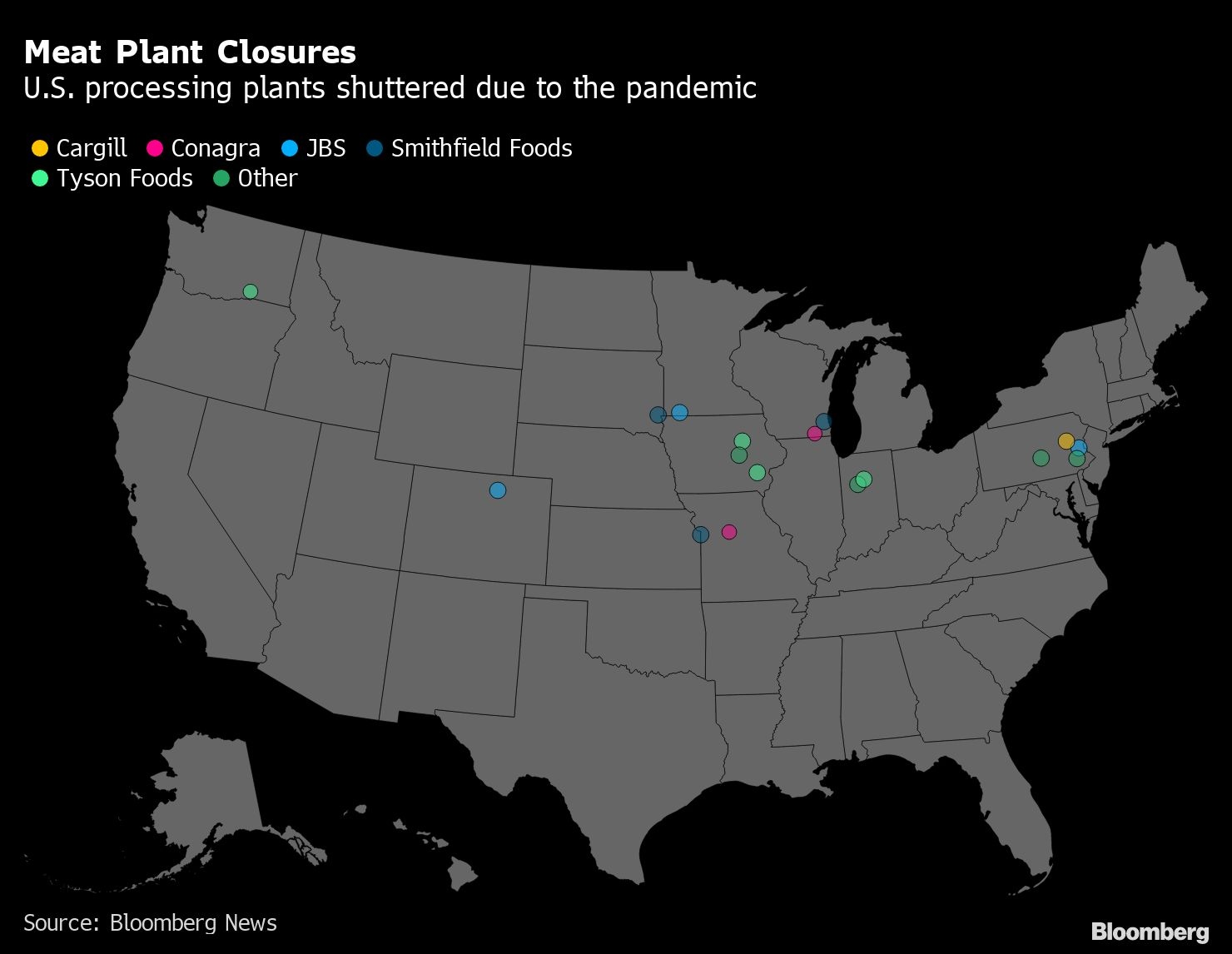 Meanwhile, with slaughterhouses closing, farmers don’t have a place to sell their animals. That’s forcing some livestock producers to dispose of them. It’s the latest cruel blow to supply chains, with food being wasted en masse at the same time that grocery store shelves are running empty.

The situation for U.S. farms is so severe that the Animal and Plant Health Inspection Service is setting up a center to help identify potential alternative markets and assist on “depopulation and disposal methods.”

It’s hard to say exactly why the virus is spreading so fast among meat-plant employees. Some analysts have cited the fact that these are usually low-paying jobs that are often filled by immigrants and migrants. That means workers can live in cramped quarters, with sometimes more than one family sharing the same dwelling — so if one person gets sick, the disease can spread quickly.

Employees are also in close proximity on the job, with the work on some processing lines being described as “elbow-to-elbow.” Even if line speeds are slowed, workers spread out and shifts are staggered, there’s still the chance of mingling in break rooms and hallways. These plants see thousands of people coming in and out every day — it’s basically the opposite of social distancing.

At the same time, U.S. federal employees responsible for inspecting meat plants are falling ill. More than 100 inspection-service employees have tested positive for COVID-19, the government confirmed. At least two deaths of inspectors have been reported.

U.S. inspectors travel among facilities. That’s adding to fears that shutdowns will keep occurring if a sick federal employee brings the infection to plants where there’s not yet an outbreak.

In Brazil, JBS’s Passo Fundo poultry plant in Rio Grande do Sul state was ordered to close after 36 of its workers tested positive for the virus, according to Priscila Schvarcz, a labor prosecutor in the municipality.

JBS said measures implemented at the plant “are fully supported by reports and technical recommendations from health agencies and medical specialists.” The company said it trusts operations would resume shortly and that “employee protection has always been the first JBS goal since the pandemic started.”

The closure comes amid a jump in COVID-19 cases in Brazil.

“Brazilian meat companies have been taking a lot of preventative measures, but we don’t see progress in agglomeration of people,” said Jose Modelski Junior, a spokesperson for Contac, which represents food-industry workers. “They are not willing to change the number of workers in the same shift, and we are worried about that.”