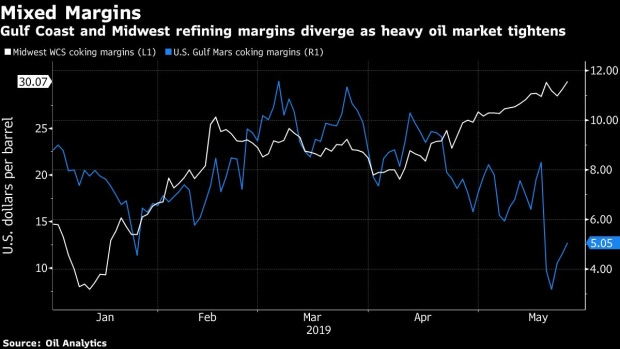 (Bloomberg) -- A global shortage of heavy crude will create hurdles for America’s key refining belts just as they ramp up gasoline production for summer driving season.

In the Gulf Coast, dwindling heavy oil supplies have suppressed refining margins, while Midwest refiners may not reach the high run rates seen last summer. Gulf Coast profits from coking -- a process where heavy crude is broken down into fuels such as gasoline and diesel -- are already at their lowest levels in nearly a decade, according to data from Oil Analytics Ltd.

The decline comes as a loss of crude supply from sanctions-hit Venezuela and Iran, as well as production cuts by Canada and OPEC, have driven up the price of fuel oil, which is used to make gasoline through the coking process. Gulf Coast fuel oil, a byproduct of heavy crude, reached a six-month high in late April.

For June through August, runs are expected to be around 9.3 million barrels a day, similar to utilization to last year, Chris Barber, head of refining biofuels analysis for ESAI Energy, said by phone.

In the Midwest, it’s a different story. Refineries in the region rely on Western Canadian Select, a heavy crude that’s recently gotten cheaper after Alberta’s government eased some production limits. The inexpensive oil supply has driven up coking margins for area refiners -- but supply remains tight as Alberta won’t lift its mandatory output curbs until the end of the year.

To contact the editors responsible for this story: David Marino at dmarino4@bloomberg.net, Catherine Traywick, Mike Jeffers