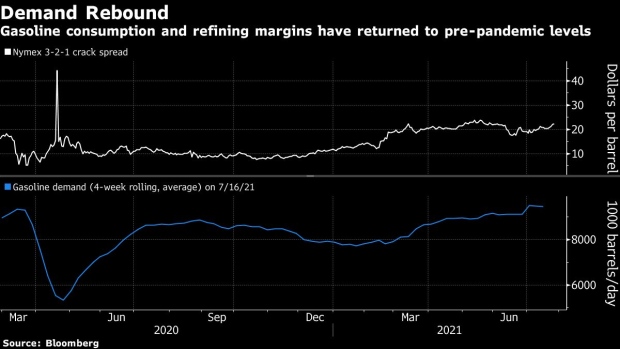 (Bloomberg) -- Americans are burning through gasoline and diesel like Covid-19 never happened, but U.S. fuel refiners aren’t cashing in as previously expected because of a confluence of headwinds.

Refiners are struggling to source cheaper grades of oil and are instead resorting to more expensive imports. Some are paying record amounts to comply with the U.S. biofuel mandate. On top of all that, a glut of jet fuel due to lingering international travel restrictions is curbing what, in pre-pandemic times, would normally be a much bigger source of revenue.

The plight of the sector stands in sharp contrast to that of oil and natural gas producers, who are set to report a bumper set of second-quarter earnings after commodities prices rebounded this year.

The outlook has deteriorated to such an extent that analysts have slashed the average second-quarter earnings estimate for Valero Energy Corp. -- which reports Thursday -- by 80% in the past month, according to data compiled by Bloomberg. Marathon Petroleum Corp. and Phillips 66 have seen cuts of 45%. Smaller refiners PBF Energy Inc, CVR Energy Inc. and Delek U.S. Holdings Inc. now expected to post losses.

Earnings “won’t be as strong,” even with demand improving, and companies that are less diversified into other areas such as chemicals and lubricants are getting hit especially hard, Silvio Micheloto, an analyst at Mizuho Financial Group Inc, said in an interview.

Weak profits may ultimately force some refiners to cut production, which could in turn cause higher prices at the pump for consumers.

To be sure, the industry is in a better place than it was last year, when Covid-19 decimated energy demand. The revival in driving across the nation helped some refining companies return to overall profitability. The average so-called 3-2-1 crack spread, a proxy for margins on making gasoline, jumped 30% in the second quarter versus the first quarter to levels last seen in 2019.

Pricey oil deserves much of the blame. West Texas Intermediate crude, the U.S. benchmark, climbed above $70 a barrel in June for the first time since 2018. While gasoline prices have duly risen as well, refineries haven’t been able pass on higher costs for other crude derivatives such as fuel oil and asphalt. Worsening margins for those products may have wiped out $600 million in earnings before one-time items for a group of eight independent refiners, according to Jason Gabelman, an analyst at Cowen Inc.

Adding to that, a tighter supply of WTI is reducing refiners’ ability to source cheaper oil domestically and sell refined products against more expensive Brent crude, the leading global oil price benchmark. They’re also switching from cheaper imports of heavy crude, which have become scarcer because of OPEC+ production cuts, to other, more costly grades.

The headwinds don’t seem likely to die down anytime soon, according to Paul Y. Cheng, an analyst at Scotiabank. He sees increases in U.S. gasoline inventories in the short-term amid bigger imports and risks for exports given the spread of the Delta variant of Covid-19. In the longer term, global refining capacity is increasing, and will be higher in 2022 than in 2019, and will curb earnings, Cheng said.

“My suspicion is that the current consensus estimate for the second half of this year and 2022 needs to come down,” he said.