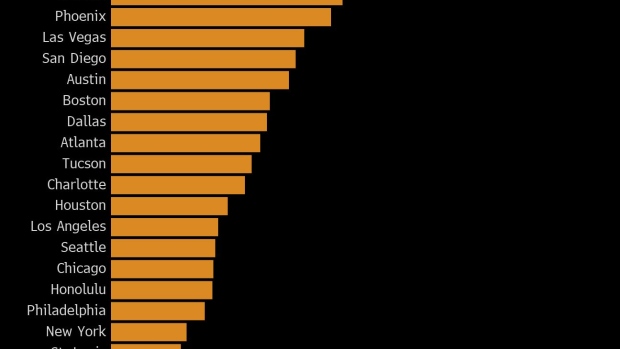 (Bloomberg) -- U.S. rent inflation reached yet another record in January, fueled by red-hot markets such as Miami.

Single-family rental prices jumped 12.6% from a year earlier, according to the latest CoreLogic Single-Family Rent Index. All major metropolitan areas saw increases, but the Sun Belt experienced by far the biggest gains, with Miami’s asking rents up almost 39%.

All indicators show that the renting market is heating up, as would-be buyers of houses increasingly turn to rentals because they can’t find -- and can’t afford -- their dream houses.

Institutional investors have jumped on the opportunity, buying a record share of U.S. houses last quarter, according to data compiled by RedFin Inc. That will likely push rents even higher in the coming months, as tenants renew their leases or move to a new place.

Rents in Florida’s Orlando and in Phoenix rose 19.9% and 18.9%, respectively, in January, according to CoreLogic, which tracks rental prices in almost 100 metro areas. Housing has fueled overall consumer-price inflation in booming cities in the South, with Phoenix cracking the double-digit barrier last month -- and Miami getting close.

The Washington, D.C. area recorded the lowest rent inflation with a 5.6% rate -- which is more than the average salary increase of 3% planned this year for the area’s Federal government workers. About 15% of workers in the area are employed by the Federal government.