U.S. retail sales dropped by more than forecast in November and the prior month was revised to a decline, indicating the economic rebound is hitting bumps amid record coronavirus cases and lawmakers’ extended wrangling over a new stimulus package.

Total retail sales decreased 1.1 per cent from the prior month, following a 0.1 per cent October decline, the first drops since March and April, Commerce Department figures showed Wednesday. That was worse than all but one economist had forecast in a Bloomberg survey calling for a 0.3 per cent decline, and October’s figure was originally reported as a 0.3 per cent increase. 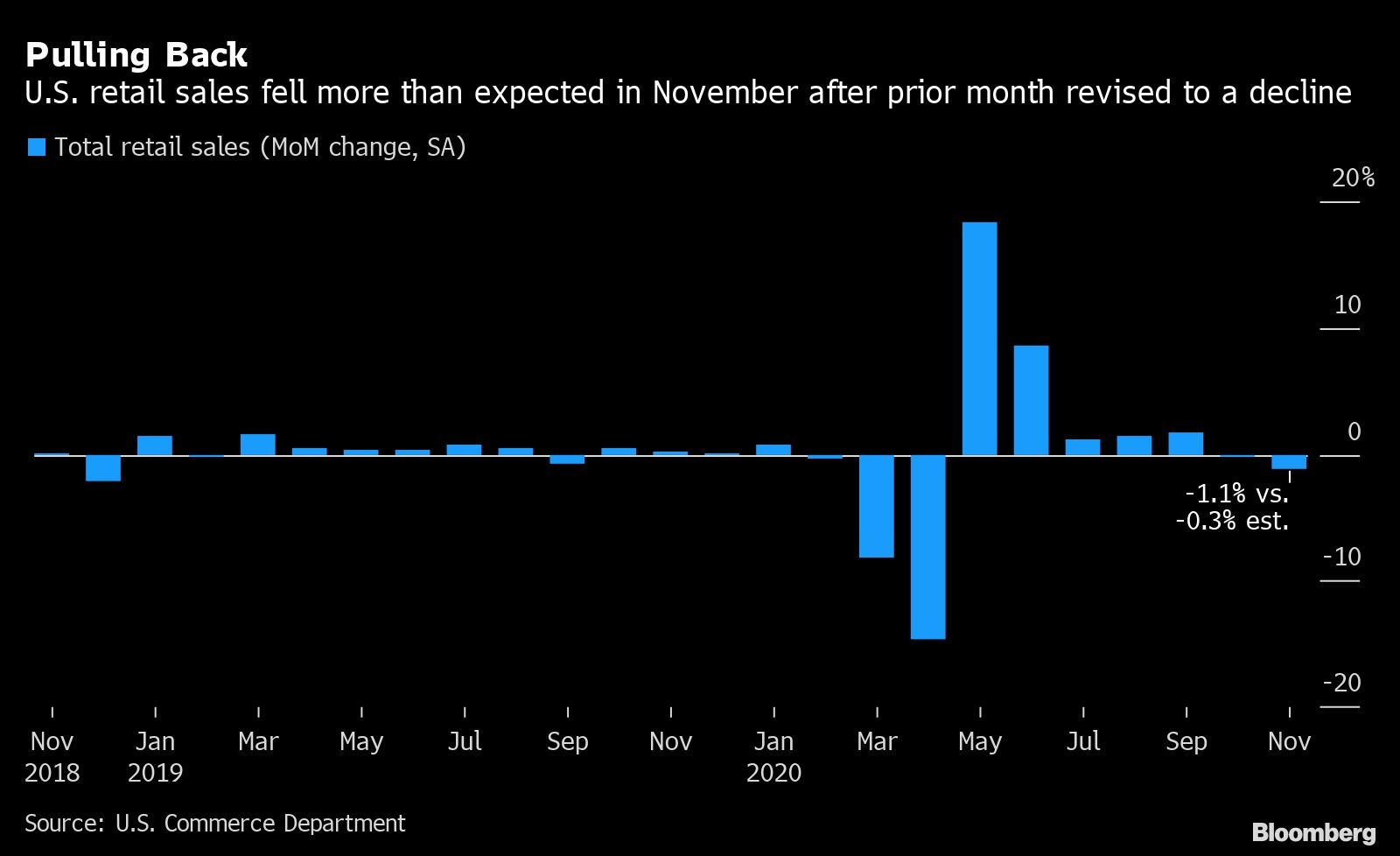 The figures signal that the third U.S. surge in COVID-19 cases, along with the arrival of colder weather, is taking an increasing toll on the economy as governments re-impose lockdowns, with more people losing their jobs and businesses shutting temporarily or permanently. Consumers are becoming more conservative with their finances during the wait for widespread vaccine distribution and a fresh stimulus package.

After months of stalemates and talks, the top congressional leaders from both parties were close to agreement Wednesday on a relief package, which they hope to attach to crucial government spending legislation and pass by the end of the week, Bloomberg News reported.

“The weak November retail data provide a discouraging outlook for 2020 holiday sales. Much earlier discounting this year failed to meaningfully spur sales in the month. While a slump in restaurant spending was not a surprise, given COVID-related restrictions, lackluster online sales could be a bad omen for the remainder of the holiday shopping season.”

U.S. stocks were little changed at the open, while 10-year Treasury yields were higher and the dollar edged lower, as investors digested the mix of positive news on stimulus and weak retail sales.

Other reports Wednesday showed U.S. business activity grew at a slower pace in December while homebuilder sentiment cooled from a record level.

The monthly drop in retail sales was most pronounced for clothing stores and restaurants, while sales at nonstore retailers -- mostly e-commerce -- barely rose from October. The only other categories to record gains were building materials and food and beverage stores.

Motor vehicle and parts dealers, the largest category at about a fifth of all retail sales, fell 1.7 per cent.

The total retail sales figure was still 4.1 per cent above the same period last year. Illustrating the deep shifts in composition of sales, nonstore retailers were up 29.2 per cent, while restaurant receipts plunged 17.2 per cent.