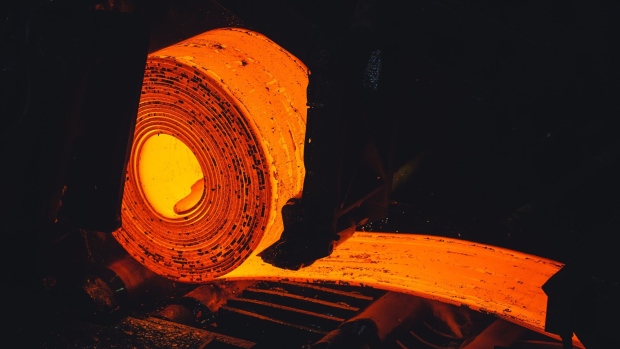 The U.S. has submitted a new proposal to the European Union to solve a Trump-era dispute on steel tariffs, offering more-generous terms, according to people familiar with the matter.

The updated proposal involves so-called tariff-rate quotas that Bloomberg reported last month, but provides for a bigger quantity of steel to enter the U.S. before higher duties kick in, according to two of the people who asked not to be identified because the discussions are private. TRQs allow countries to export specified quantities of a product to other nations at lower duty rates, but subjects shipments above a pre-determined threshold to a higher tariffs.

The EU will analyze the latest proposals, before U.S. Trade Representative Katherine Tai and European Commission Executive Vice President Valdis Dombrovskis -- who met on the sidelines of a Group of 20 trade gathering in Sorrento, Italy, on Tuesday -- meet again in Brussels next week, the people said.

Met @USTradeRep @AmbassadorTai to continue our discussions on finding a settlement on the Trump steel & aluminium tariffs #232. The work continues.

The Trump-era tariffs “need to be lifted swiftly and permanently,” Miriam Garcia Ferrer, a spokeswoman for the European Commission, said by email. “As a trusted U.S. ally, the EU cannot be deemed to pose a security threat to the U.S. Nor is it a source of global steel and aluminum excess capacity,” she said, adding that the overcapacity issue affects the EU too.

She declined to comment on the talks but said a solution would have to respect the “traditional trade volume” before the tariffs were imposed, and be compatible with the World Trade Organization’s rules.

The Office of the U.S. Trade Representative didn’t immediately respond to requests for comment.

Then-President Donald Trump in 2018 slapped a 25 per cent duty on steel imports and 10 per cent on inward-bound shipments of aluminum from producers including the EU and China using section 232 of the 1962 Trade Expansion Act, labeling competition on the metals a national-security threat. The statute allows for levies without a vote by Congress if imports are deemed a national-security threat.

The sides are now scrambling to find a solution to the dispute before Dec. 1 when a series of new European tariffs is due to automatically kick in.

One of the people said that talks are ongoing and that the gap between the two sides remains wide, and that finding an acceptable TRQ-based solution would be very difficult.

Although both sides are keen to find a deal over what they see as a problem caused by the Trump administration to respond to a security predicament where Europe is not the issue, they both now face domestic political pressure from their respective steel industries, one of the people said.

Another challenge, the people added, is that the U.S. starts from the assumption that a tariff-based solution is acceptable, while for the EU side, it’s illegal to begin with and the optimal solution would be for the arrangement to be dropped all together.

The U.S. offer and discussions with the EU have so far pertained to steel only, and don’t include aluminum shipments, the people said.

Tariff-rate quotas are permitted under WTO rules. Furthermore, any trade restrictive measure may be allowed under the WTO’s national-security exemption if they are “taken in time of war or other emergency in international relations.”

In any case, if a nation that believes their trade is illegally discriminated against they can lodge a dispute complaint at the WTO but may not receive a final ruling due to the paralysis of the WTO’s appellate body.

U.S. steelmakers and workers generally support some sort of tariff-rate quota, with the head of the United Steelworkers, Tom Conway, saying in June he would support such a move.

Since the tariffs started in 2018, U.S.’s steel mills have been producing at their highest levels since the Great Recession, and their owners are on track to book their fattest profits yet, thanks to record high prices.

As part of any tariff-rate quota deal Washington potentially makes in lifting tariffs on steel imports from the EU, U.S. steelmakers are demanding a clause that says the material must be melted and poured in the EU. The steel industry argues that not having this requirement would allow Russian, Chinese or other metal to pass through EU borders, and be sold into the U.S.

Following years of state support that the U.S. has raised concerns about, Chinese companies now produces more than one billion tons of steel annually -- almost 60 per cent of global output of the material, Tai said last week. Since 2000, employment in the U.S. steel industry has dropped 40 per cent, she said.