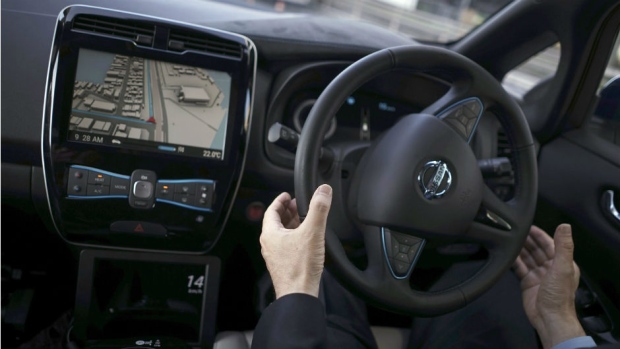 An Uber driverless car waits in traffic during a test drive in San Francisco self-driving car , The Canadian Press

China’s plan to standardize the use of 5G for vehicles to talk to each other could lead to the U.S. falling behind in the commercialization of self-driving cars, according to Qualcomm Inc.

China will be “saving hundreds, if not thousands, of lives much sooner than we will as we fumble to determine which is the standard that is best for the long-term road map in the Western world,” Patrick Little, a Qualcomm senior vice president, said in an interview. “If we can get around a common standard, we can deploy it more quickly, save a lot of money and save a lot of time.”

Little’s comments are part of an effort by Qualcomm and more than 100 companies to push regulators worldwide to embrace a standard called C-V2X -- cellular vehicle-to-everything -- that will run on 5G. The technology would enable vehicles and infrastructure to beam real-time traffic data to one another and reduce accidents. Rival firms are lining up behind a Wi-Fi-based standards and pursuing a market for car electronics data transmission that IHS Markit estimates will grow to $9.2 billion by 2025.

“The big thing is, it is available, it is proven, it has millions of miles driven and tested,” NXP President Kurt Sievers said in an interview.

Choosing between the two standards is only one piece of the puzzle involved in making self-driving cars a reality. China is years behind the U.S. in terms of road testing robocars, with Alphabet Inc.’s Waymo and others having logged millions of test miles in California alone.

Still, China is the world’s biggest auto market and has sent a clear signal it will embrace C-V2X. In October, the country announced plans to use the standard and set aside airwaves specifically for connected cars. That’s led 5G Automotive Association, a group founded in September 2016, to predict China will be first to get C-V2X cars on the road. Ford Motor Co. and Byton have disclosed plans to make vehicles that adopt the standard.

In the U.S., the Trump Administration has yet to make a decision on which standard to back. The European Commission was poised to back DSRC, but the proposal was shot down by member states in July. Elsewhere in Asia, Japan is planning to allocate spectrum to DSRC, and South Korea intends to set aside airwaves for both standards.

DSRC’s entrenched position will hinder C-V2X’s adoption outside of China in the next three years, Bloomberg NEF wrote in an April report. But longer-term, the U.S., Korea and Japan are likely to switch to C-V2X as those countries aggressively deploy 5G networks, the analysts said.

The prospect of improving road safety is a major incentive for regulators to speed up their decision-making. The University of Michigan Transportation Research Institute estimated last year that as many as 8.1 million car crashes and 44,000 deaths could be prevented in the U.S if the federal government picked a technology this year compared with three years from now.