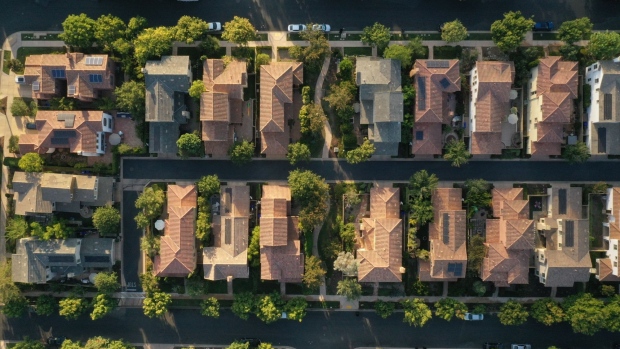 Homes and condominiums are seen in this aerial photograph taken over a Lennar Corp. development in San Diego, California. , Bloomberg

Sales of previously owned U.S. homes declined in March to a seven-month low as a surge in prices and a lack of available properties limited potential buyers.

Contract closings decreased 3.7 per cent from the prior month to an annualized 6.01 million, after a revised 6.24 million in February, according to National Association of Realtors data released Thursday. The median forecast in a Bloomberg survey of economists called for a 6.11 million rate in March.

Even though mortgage rates have begun inching up since the start of the year, borrowing costs remain historically low and that’s keeping demand elevated. But a lack of inventory and surging prices are constraining purchases. The median selling price jumped 17.2 per cent from a year ago to US$329,100 in March, the highest in records back to 1999.

The price gain over the past 12 months was also the strongest on record.

“We know that home prices have been rising, mortgage rates inching higher, housing affordability becoming much more challenging, however I would say the softening sales activity is not due to demand going away,” Lawrence Yun, NAR’s chief economist, said on a call with reporters.

“Demand remains strong, it is simply the severe lack of supply that is holding back sales conditions,” Yun said.

There were 1.07 million homes for sale last month, down more than 28 per cent from a year earlier. At the current pace, it would take 2.1 months to sell all the homes on the market. Realtors see anything below five months of supply as a sign of a tight market.

Robust demand for the limited number of homes available are forcing prices skyward. On average, properties remained on the market for a record-low 18 days in March. Eighty-three percent of the homes sold in March were on the market for less than a month, the NAR said.

Builders are moving quickly to create more inventory. Housing starts surged to the highest since 2006 in March as applications to build also rose. And even with material costs rising, a measure of home builder sentiment remained at a historically high level in April.

Sales of previously owned one-family homes dropped 4.3 per cent from a month earlier to a 5.3 million pace, the slowest since June, as the median selling price also climbed to a new high

All regions posted sales declines in March, led by an 8 per cent decrease in the West and a 2.9 per cent drop in the South

Existing-home sales account for about 90 per cent of U.S. housing and are calculated when a contract closes. New-home sales, which make up the remainder, are based on contract signings and will be released Friday

--With assistance from Chris Middleton and Sophie Caronello.