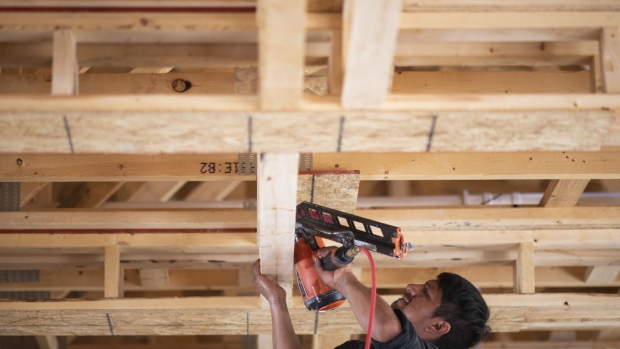 A worker uses a nail gun in a home under construction at a Romanelli and Hughes Building Co. subdivision in Dublin, Ohio, U.S., on Thursday, July 9, 2020. The U.S. housing market this week surprised economists by rallying in the midst of a pandemic. But the coronavirus may drag down home values after all. Photographer: Ty Wright/Bloomberg , Bloomberg

U.S. sales of previously owned homes surged by the most on record in July as lower mortgage rates continued to power a residential real estate market that’s proving a key source of strength for the economic recovery.

Closing transactions increased 24.7 per cent from the prior month to a 5.86 million annualized rate, the strongest pace since the end of 2006 and reflecting broad gains across the U.S., according to National Association of Realtors data issued Friday. The median estimate in a Bloomberg survey of economists called for a 5.41 million rate. Prices jumped 8.5 per cent from a year earlier, on an unadjusted basis, to the highest on record.

“The housing market is past the recovery phase and is now in a booming stage,” Lawrence Yun, NAR’s chief economist, said on a call with reporters. “Certainly, record-low mortgage rates are bringing more buyers into the market.”

Cheaper borrowing costs, pent-up demand and greater interest in suburban markets following the pandemic-related shutdowns earlier in the year are so far generating plenty of momentum in housing. At the same time, lean inventory, higher asking prices, and the coronavirus itself represent hurdles to further outsize gains.

“With the sizable shift in remote work, current homeowners are looking for larger homes and this will lead to a secondary level of demand even into 2021,” Yun said in a statement.

There were 1.5 million existing homes for sale last month, down 21.1 per cent from July 2019, the 14th straight year-over-year decline. It was the leanest supply for any July on record.

The number of houses for sale would last 3.1 months at the current sales pace. Anything below five months is seen as a tight market.

In July, properties remained on the market for an average of 22 days, the shortest timespan on record. The median home price increased to an all-time high of US$304,100 last month and compared with $280,400 a year earlier.

Purchases of previously owned single-family homes rose 23.9 per cent and sales of condominiums increased nearly 32 per cent, according to the NAR data.

Previously owned home sales account for roughly 90 per cent of U.S. tractions and are calculated when a contract closes. July new-home sales data will be released by the Commerce Department on Tuesday.