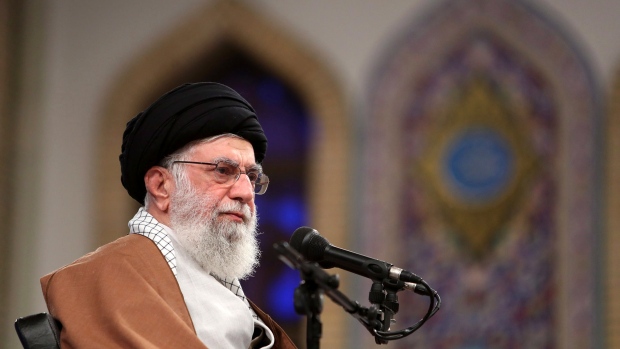 The U.S. used the 40th anniversary of the Iran hostage crisis to sanction key officials reporting to Supreme Leader Ali Khamenei, including his son, and called on the Islamic Republic to release Americans believed to be held in the country.

The U.S. said Monday that the officials include those involved in terrorist attacks in Lebanon and Argentina. Three Trump administration officials, briefing reporters on condition of anonymity, also announced a US$20-million reward for information leading to the return of American Robert Levinson, a former FBI agent who disappeared in 2007.

“Today the Treasury Department is targeting the unelected officials who surround Iran’s Supreme Leader, Ayatollah Khamenei, and implement his destabilizing policies,” Treasury Secretary Steven Mnuchin said in a statement. “These individuals are linked to a wide range of malign behaviors by the regime, including bombings of the U.S. Marine Barracks in Beirut in 1983 and the Argentine Israelite Mutual Association in 1994, as well as torture, extrajudicial killings, and repression of civilians.”

Among those targeted for inclusion on Treasury’s sanctions list are Ebrahim Raisi, the head of the country’s judiciary, for involvement in cracking down on public protests in 2009, according to the statement. Also designated was Mohammad Mohammadi Golpayegani, the Supreme Leader’s chief of staff, and Ali Akbar Velayati, a senior adviser to the Supreme Leader who Treasury said helped the Iranian regime extend credit lines to Syrian President Bashar al-Assad’s regime.

Mojtaba Khamenei, a son of the leader, was targeted “for representing the Supreme Leader in an official capacity despite never being elected or appointed to a government position aside from work in the office of his father.”