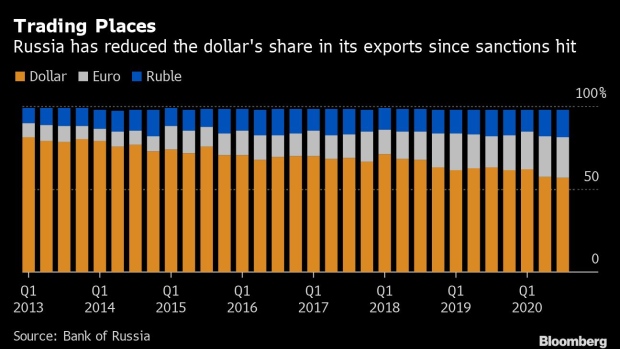 Pedestrians walk past the Ministry of Foreign Affairs headquarters building in Moscow, Russia, on Thursday, April 15, 2021. The Biden administration is poised to impose a raft of new sanctions on Russia, including long-feared restrictions on buying new sovereign debt, in retaliation for alleged misconduct including the SolarWinds hack and efforts to disrupt the U.S. election, according to people familiar with the matter. , Bloomberg

(Bloomberg) -- The U.S. is threatening Russia with further repercussions if it doesn’t change behavior on foreign policy and the treatment of opposition activists at home. If history is anything to go by, any new sanctions will just push President Vladimir Putin to make his economy even more self-sufficient.

In the seven years since Russia’s annexation of Crimea, Putin’s government and central bank have stripped back the country’s exposure to dollars, shifted assets out of the U.S. and sold a smaller share of its debt to foreigners.

“Everyone will just continue playing the same games,” said Elina Ribakova, deputy chief economist at the Institute of International Finance in Washington. “The Americans are saying: be careful or we could do more, but Russia is just going to continue down the path toward economic autarky.”

The administration of U.S. President Joe Biden is keeping the threat of sanctions hanging over Russia even after a sweeping round of penalties imposed last week. On Sunday, the U.S. warned of “consequences” if Navalny, one of Putin’s most outspoken critics, dies in prison.

Of course, there’s only so much that Russia can do to protect its economy without cutting it off entirely from the global economy. But officials in Washington are also restrained by the fact that if they go too far (as they did with sanctions on aluminum giant United Co. Rusal that were later revoked), they risk sending tremors through global markets.

Last week’s penalties included a ban on purchases of bonds on the primary market, so the next big targets could be secondary-market debt and Russian banks’ access to the financial messaging system used for most international money transfers. Russia is already looking for alternatives to the system, known as SWIFT, to make itself less vulnerable, though attempts so far haven’t led to much.

The share of gold in Russia’s now $580.5 billion international reserves jumped above dollars for the first time on record last year following a multi-year drive to reduce exposure to U.S. assets. The precious metal made up 24% of the central bank’s stockpile as of the end of September 2020, the latest date for which the breakdown is available. The share of dollar assets was 22%, down from more than 40% in 2018.

That trend also shows up in the share of Russia’s international reserves held in the U.S., which plummeted to just under 7% by the end of September, down from about 30% before the Crimea annexation. Most of the shift happened in the second quarter of 2018 just after the Rusal sanctions revealed how vulnerable Russia was to sanctions.

Acting on a pledge by Putin to “de-dollarize” trade, Russia has been slowly cutting back on use of the greenback in its exports with the European Union, China and India. The euro has almost overtaken the dollar in Russia’s trade with the EU and has already surpassed it in exports to China. About two-thirds of Russia’s exports to India, meanwhile, are paid for in rubles.How Virus-Panicked Markets Showed Dollar’s Still King: QuickTake

One reason the Finance Ministry wasn’t too concerned about the latest sanctions measure on government debt is that Russia has mostly been selling to local banks at its weekly auctions anyway. Borrowing was ramped up during the pandemic even though foreign demand was weak, which increased the overall size of the market and pushed down the share of foreigners.

U.S. banks can still buy new debt on the secondary market after the penalties come into force in mid-June. Russia is “well positioned” for a near term market disruption because it has a high cash buffer and demand from local banks is “robust,” Fitch Ratings said in a research note published late on Friday.