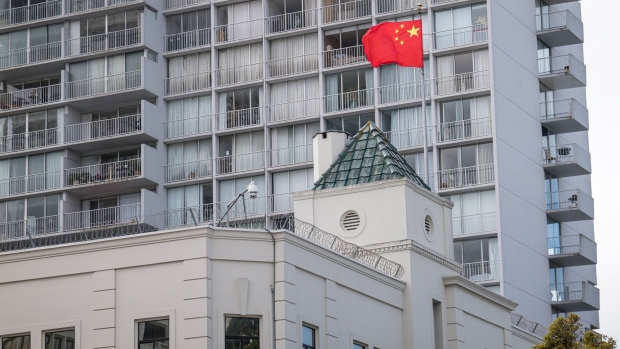 A Chinese flag flies outside the China Consulate General building in San Francisco on July 23. , Bloomberg

U.S. officials said a Chinese researcher who took shelter at the country’s consulate in San Francisco is in custody and will likely make a court appearance Friday.

Officials briefing reporters on Friday declined to discuss the circumstances of the arrest, but U.S. law enforcement had been seeking Juan Tang, a researcher at the University of California at Davis who was charged with lying about her military service in China.

Days after U.S. agents interviewed Tang last month, prosecutors filed a criminal complaint against her in federal court, under seal, seeking a warrant for her arrest for visa fraud.

A spokesman for the Chinese Foreign Ministry accused the U.S. of “political persecution” Thursday in response to a question about the case, but stopped short of saying whether Tang was being sheltered by diplomats. “We urge the U.S. to stop using any excuse to limit, harass and crackdown on Chinese scholars and Chinese students in the U.S.,” spokesman Wang Wenbin told a regular news briefing in Beijing.