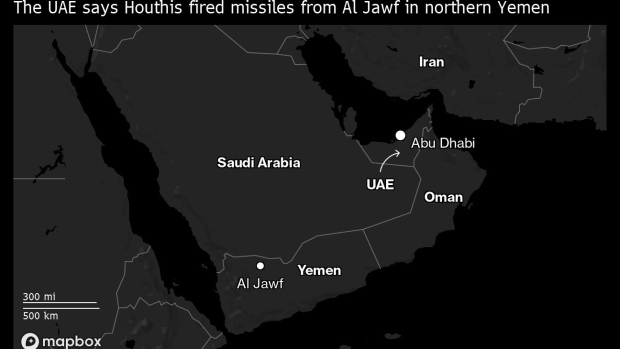 (Bloomberg) -- The United States and its Gulf allies have discussed ways to hold Yemen’s Houthi group accountable after the Iranian-backed fighters attacked the United Arab Emirates for the second time in a week, the White House said.

The talks come after the Houthis launched missiles targeting Abu Dhabi on Monday which were intercepted by U.S. forces stationed at a local military base. The attack, which sent ripples through the oil market and pressured local stocks, came barely a week after the UAE suffered its first deadly strike in Yemen’s seven-year war.

U.S. National Security Advisor Jake Sullivan met with envoys to the UAE and Saudi Arabia to “discuss ongoing Houthi attacks against civilian targets that have resulted in civilian casualties in both countries,” the White House said in a statement on Monday. It gave no further details on how the countries would hold the group to account.

The UAE is part of a military coalition led by Saudi Arabia that has been battling the Houthis in Yemen. The group last week launched drones on Abu Dhabi’s airport and a fuel depot, killing three people, and has vowed more attacks on the Middle East’s financial and tourism hub.

On Monday, U.S. forces at Al Dhafra Air Base in the UAE worked with local forces to use multiple Patriot interceptors against two inbound missiles, according to a statement from U.S. Central Command. U.S. forces “set a heightened alert posture at the time of the attack” which involved “airmen using available bunkers.”

The escalation comes at a critical time for regional diplomacy. Iran’s longtime support of the Houthis means the incidents could upset fragile diplomatic efforts to ease frictions with Gulf Arab neighbors as well as broader negotiations to restore Tehran’s 2015 nuclear deal with world powers.

The UAE said it had destroyed the launchers in Yemen’s northern Al Jawf region, more than 1,270 kilometers (790 miles) from Abu Dhabi, immediately after the missiles were fired.