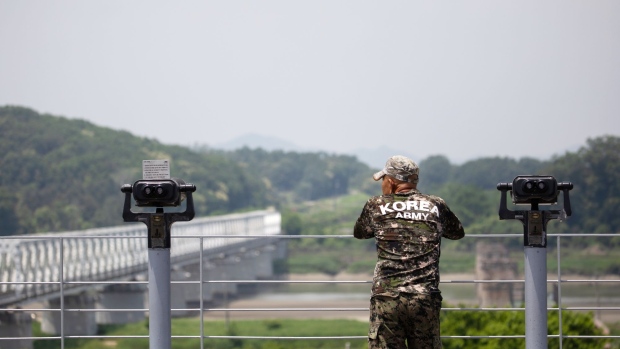 A man wearing a T-shirt with the words "Korea Army" looks across to the North Korean side of the border at the Imjingak pavilion near the Demilitarized Zone (DMZ) in Paju, South Korea, on Wednesday, June 17, 2020. North Korea said it would deploy troops into areas on its side of the border where it had joint projects with South Korea, further escalating tensions with its neighbor a day after destroying a liaison office the two once shared. Photographer: SeongJoon Cho/Bloomberg , Bloomberg

(Bloomberg) -- The U.S. offered it support for the move by the leaders of two Koreas to improve relations and reconnect the hotlines cut off for more than a year, saying it might help stalled nuclear talks.

It was responding to what appeared to be a coordinated announcement Tuesday from Seoul and Pyongyang calling for reconciliation and reopening hotlines that had been silent since a flare-up in June 2020, when Kim Jong Un’s regime blew up a liaison office on its side of the border funded by South Korean President Moon Jae-in’s government -- one of Pyongyang’s most dramatic provocations in years.

“This is a positive step,” the U.S. State Department said in a statement. “Diplomacy and dialogue are essential to achieving complete denuclearization and to establishing permanent peace on the Korean Peninsula.”

The agreement was spurred by an exchange of letters between Kim and Moon, coming as the South Korean president, in the final months of his term that ends in May, tries to make good on his key policy pledge of reconciliation.

South Korea’s presidential office later said there was no discussion of a possible summit between Moon and Kim. But South Korean newspaper Chosun Ilbo, said in a report citing unnamed officials that Seoul was preparing for a summit and looking at precautions to prevent the spread of the coronavirus.

North Korea’s strict border closures due to the pandemic have undermined an economy already battered by U.S.-led sanctions. Its economy will barely grow in 2021 after its worst contraction in decades as it continues to struggle with the pandemic, international sanctions to punish it for nuclear and missile testing, and a lack of trade with China, Fitch Solutions said in April.

North Korea has said it has no Covid-19 infections -- a claim doubted by the U.S., Japan and others -- and has so far failed to settle on terms that would allow global groups to deliver vaccines to the reclusive country.

Kim laid out the stark conditions of the Covid fight in a speech at an event for war veterans. “The unprecedented global health crisis and the difficulties caused by the long-term lockdown are becoming an ordeal that is no less than the situation of war,” the official Korean Central News Agency on Wednesday reported him as saying.