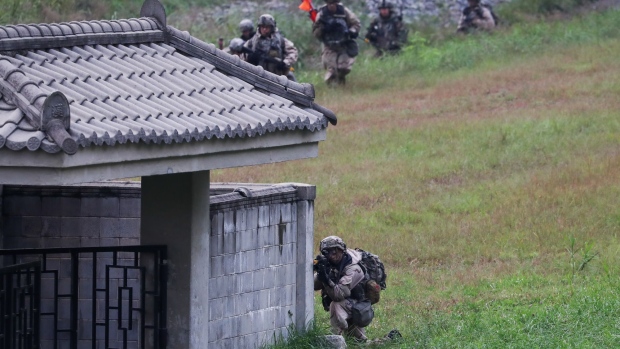 A U.S. army soldier aims his weapon and takes position behind a wall during Warrior Strike VIII, a bilateral training exercise between the U.S. Army's 2nd Armored Brigade Combat Team, 1st Cavalry Division, and the the South Korean army in Paju, South Korea, on Tuesday, Sept. 19, 2017. North Korea has fired two missiles over Japan in the past month, both of which landed in the Pacific Ocean beyond the northern island of Hokkaido. Leader Kim Jong Un has threatened to fire missiles into waters near Guam, home to U.S. military bases in the Pacific. , Bloomberg

(Bloomberg) -- The U.S. said that South Korea’s decision to pull out of an intelligence-sharing deal with Japan endangers American troops -- an usually blunt criticism of one of Washington’s closest allies.

The Trump administration is disappointed in South Korean President Moon Jae-in’s announcement Thursday that his government would stop participating in the 2016 General Security of Military Information Agreement with Japan, U.S. State Department spokeswoman Morgan Ortagus said Sunday. The pact allowed the two neighbors to directly share intelligence about joint security concerns including North Korea and China, without going through the Americans.

“We are deeply disappointed and concerned that the ROK’s government terminated the General Security of Military Information Agreement,” Ortagus said in a Twitter post. “This will make defending #Korea more complicated and increase risk to U.S. forces.”

The criticism is perhaps the clearest sign yet of the Trump administration’s frustration with the months-long feud between South Korea and Japan. Over the weekend, President Donald Trump criticized Moon and his government at a Group of Seven meeting in France, the Sankei newspaper reported, citing unidentified Japanese government sources.

The acrimonious dispute is rooted in historical grievances over Japan’s 1910-45 occupation of the Korean Peninsula, but has recently escalated to include trade and security cooperation. While South Korea and Japan are protected by tens of thousands of U.S. troops, the Moon administration had argued after withdrawing from the pact that it would strengthen its alliance with the U.S. by increasing defense spending.

The dispute risks complicating a coordinated response to North Korea’s continued missile tests and China’s rising military power projection in the region. On Saturday, North Korean leader Kim Jong Un personally guided the test firing of a rocket launcher and sent short-range ballistic missiles into the sea between South Korea and Japan for the 18th and 19th time since May.

The U.S. Department of Defense had previously expressed “strong concern and disappointment” with South Korea’s decision to exit the security pact. While the agreement doesn’t require the exchange of intelligence and both countries are part of a similar three-way pact with the U.S., the deal was significant because it demonstrated their ability to cooperate independently from Washington.

South Korea’s defense minister, Jeong Kyeong-doo, told the National Assembly’s defense committee Aug. 5 that there had been 26 instances of intelligence-sharing with Japan since the agreement was signed. He nevertheless played down its practical importance, telling the committee the pact was more about relationships than utility.

To contact the reporter on this story: Iain Marlow in Hong Kong at imarlow1@bloomberg.net