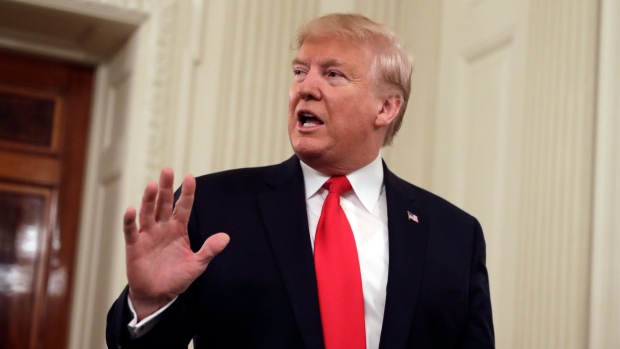 The Trump administration plans to restrict the news media’s ability to prepare advance stories on market-moving economic data, according to people familiar with the matter, in a move that could create a logjam in accessing figures such as the monthly jobs report.

Currently, the Labor Department in Washington hosts “lockups” for major reports lasting 30 to 60 minutes, where journalists receive the data in a secure room, write stories on computers disconnected from the internet, and transmit them when connections are restored at the release time.

The department is looking at changes such as removal of computers from that room, and an announcement could come as soon as this week, said the people, who spoke on condition they not be identified. While the rationale was unclear, the government has cited security risks and unfair advantages for news media in prior changes to lockup procedures.

Lockups, which are permitted but not required by government regulations, have been a mainstay for U.S. media for almost four decades. They have been designed to give reporters time to digest figures on market-moving data and make sure they are accurate before distributed en masse to the public. Statistics agencies and central banks in the U.K. and Canada use similar lockup procedures.

The U.S. move would upend decades of practice, and media organizations including Bloomberg News and Reuters have challenged prior changes to procedures. The shift could also spur an arms race among high-speed traders to get the numbers first and profit off the data, raising questions about fairness in multitrillion-dollar financial markets.

Michael Trupo, a spokesman for the Labor Department, didn’t respond to multiple requests for comment. The Commerce Department -- which provides advance access to its reports such as gross domestic product and retail sales at the Labor-hosted lockups -- referred questions on the matter to Labor.

Without news services transmitting their reports at the release time and allowing additional access points, the government may have to prepare its websites to handle potentially heavier loads under the new system, which could mean adding security measures or increasing the traffic capacity.

“The details of economic data releases matter,” said Bipan Rai, North America head of foreign-exchange strategy at CIBC. “The longer it takes to suss out the details post-release, the higher the chances that markets will whip around.”

In 2012, the Labor Department under the Obama administration sought to alter lockups to require journalists to use government-owned computers to write their stories. Officials at the time framed the change as addressing security risks.

After protests from Bloomberg News and other news organizations, and a congressional hearing in which editors testified, the department agreed to allow the media to continue using their own equipment and data lines. Reporters are required to leave mobile phones and other electronic devices in lockers outside of the lockup room, along with personal effects such as umbrellas and purses.

The Labor Department move would follow a similar decision by the U.S. Department of Agriculture in 2018 to scale back lockups covering farm products, particularly the closely-watched monthly crop forecasts that typically move markets in soybeans, corn and wheat.

Agriculture Secretary Sonny Perdue said at the time that because of technological changes, journalists can now get information to their readers faster than the USDA can put it on its website, creating an unfair advantage.

The USDA’s releases since the change haven’t been without hiccups: In November, for about six minutes after the release time, the website produced an error message.

The Federal Reserve separately hosts its own media lockups where journalists get advance access to interest-rate decisions, meeting minutes and industrial-production data, and write their stories on computers in a secure room.

Without news services like Bloomberg News and Reuters transmitting their reports at the precise release time and allowing additional access points, the lockup changes put the burden on the government to ensure that its website remains accessible while being bombarded by everyone from algorithmic traders to the general public.

U.S. government websites aren’t immune from attack or technical issues that could limit public access. In 2013, the Obamacare website crashed when millions tried to access it and register under the then-new health care program, preventing Americans from enrolling in coverage until months later, after a frantic repair effort.

Earlier this month, a pro-Iran group hacked a U.S. government website -- the Federal Depository Library Program -- and posted messages related to the U.S. killing of a top Iranian commander.

The Obama administration’s Labor Department said in its November 2016 transition document that it took “costly security measures” including a technology upgrade to protect the data, and “significant personnel and financial resources are also required to host each lockup.”