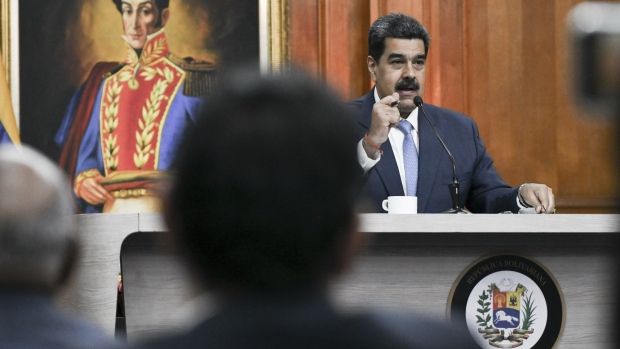 (Bloomberg) -- The U.S. is asking the African island nation of Cape Verde to extradite Alex Nain Saab Moran, the Colombian businessman charged by U.S. authorities as a dealmaker for President Nicolas Maduro’s regime in Venezuela.

The U.S. wants Saab to face charges on money laundering, and has sent a formal extradition request that includes documents and sworn statements related to a federal indictment last year in Miami, two people familiar with the matter say. Saab was arrested in Cape Verde on June 12 when the private jet he was traveling on stopped during what Venezuela has described as a humanitarian mission.

Spokespeople for the U.S. Department of Justice and the office of the primer minister in Cape Verde declined to comment. The Cape Verde attorney general’s office didn’t respond.

In Cape Verde, Saab’s lawyers unsuccessfully challenged his detention on an international arrest order, the people said. Saab also sought to be placed under house arrest instead of held in a prison, but that request was also denied, one of the people said.

A lawyer for Saab didn’t respond to a request for comment on Monday.

Saab was indicted last July of bribing Venezuelan officials and funneling more than $350 million to overseas accounts as part of a food program intended to serve those going hungry in Venezuela.

He’s also suspected of helping Maduro orchestrate a swap with Iran as part of a plan that has brought oil, workers and supplies to Venezuela in exchange for about 9 tons of gold worth $500 million. Last month, Saab’s lawyer denied Saab had any participation in the events and described his client as a “food business entrepreneur.”

Saab was at the center of a successful effort to strengthen Venezuela’s relationship with Turkey, which included shipments of at least $900 million in gold to the nation in 2018. U.S. officials allege that some of the gold made its way to Tehran in violation of American sanctions.

Venezuela’s foreign ministry said in a statement that Saab was in Cape Verde on a layover as part of a mission to acquire food for the government’s subsidy program as well as medicine for the coronavirus pandemic and his arrest is part of U.S. “hounding and aggression against the Venezuelan people.”

In a rare interview in 2017, with the Colombian newspaper El Tiempo, Saab described himself as “an open book” and denied being involved in corrupt contracts with Venezuela. “My accounts are clear and my conscience is clean,” Saab was quoted as saying.