The Trump Administration unveiled its latest package to help farmers hurt by the trade war with China, adopting a model that aims to avoid influencing production decisions. Corn futures fell.

The aid program will include US$14.5 billion in market facilitation payments directly to producers, US$1.4 billion in government purchases to be distributed through school lunch programs and local food banks and US$100 million in export promotion funds. It brings to US$28 billion the total assistance the U.S. has announced for agriculture.

Under the new program, aid for most crops will be calculated based on what is grown in their county rather than individual farmers’ plantings in order to avoid influencing production decisions, U.S. Agriculture Department officials said Thursday. Farmers can expect to receive their first payments by July or August, they said on a conference call.

“The USDA is getting creative to avoid impacting planting decisions,” said Arlan Suderman, chief commodities economist at brokerage INTL FCStone Inc. “We don’t know the details of how they are going to make that formula work. “The bottom line from a market standpoint is that it removes the link between planting decisions and the aid package. It focuses the market back on weather problems.”

Agriculture officials on the call declined to describe how they would compute trade losses but said they would be based on direct and indirect effects of tariffs imposed by China, the European Union and Turkey, though wouldn’t consider tariffs Mexico and Canada imposed on agricultural goods.

Producers of crops including corn, soybeans and wheat will receive a payment based on a single county rate multiplied by a farm’s total plantings to those crops in aggregate in 2019, according to the Agriculture Department.

Those per-acre payments aren’t dependent on which of those crops are planted in 2019, and therefore will not distort planting decisions, the agency said. Moreover, total payment-eligible plantings can’t exceed total 2018 plantings, it said. 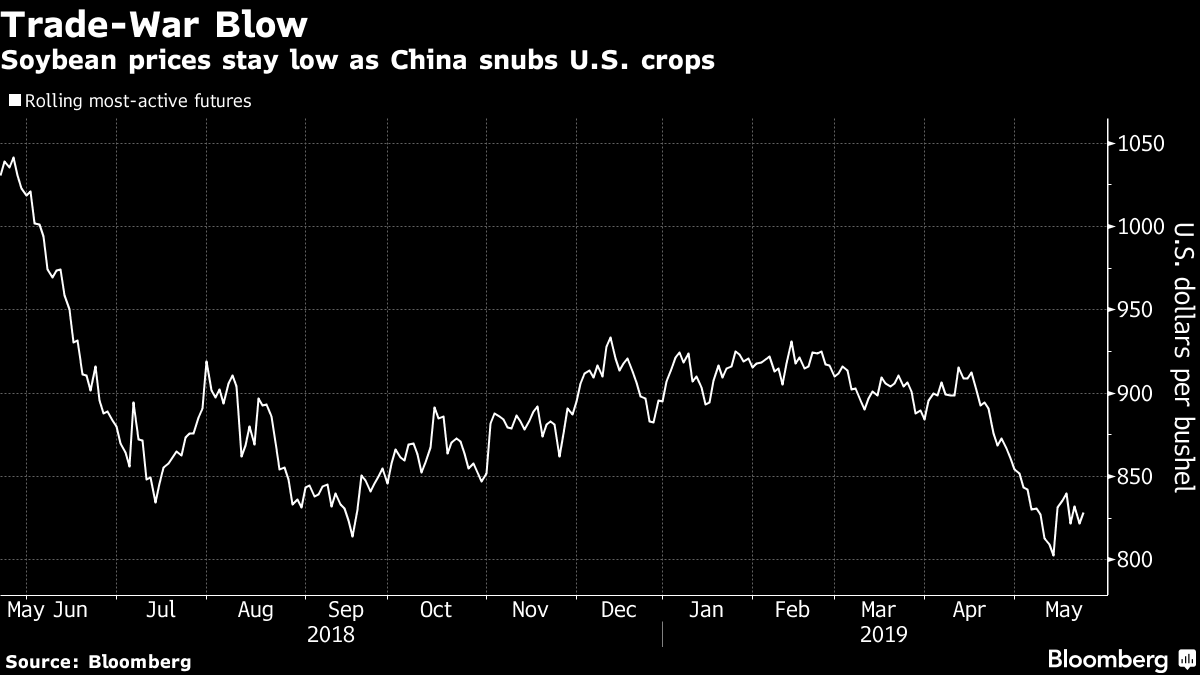 The National Pork Producers Council welcomed the packaged, but urged Congress to quickly ratify the USMCA and continue working on a resolution of the dispute in China, where the spread of African swine fever is set to boost imports of proteins including pork, beef and chicken.

The current situation in China represents a historic sales opportunity for U.S. pork," David Herring, president of the NPPC, said in a statement. "We look forward to continued work with the administration to restore favorable access to China, allowing U.S. pork producers to capitalize on this opportunity."

American farmers are struggling to remain afloat as the tit-for-tat tariffs spat with China leaves soybeans from last year’s harvest piling up. For Trump, appeasing his rural-voter base has become crucial ahead of the 2020 elections.

“What do farmers want? They want trade,” Ford said in an interview in Bloomberg’s Chicago office on Thursday. “Nobody wants a payment.”

--With assistance from Margaret Talev, Lydia Mulvany and Isis Almeida