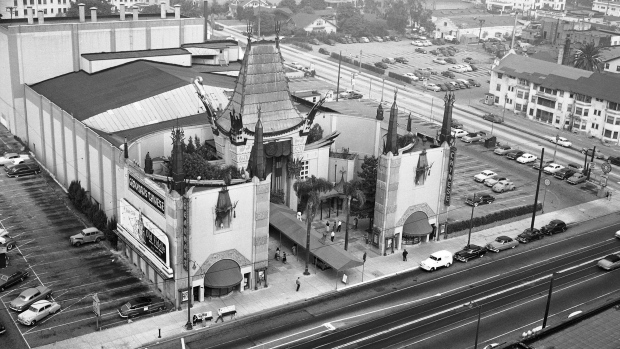 This 1952 file photo shows an aerial view of Grauman's Chinese Theater in Hollywood. The theatre was one of the old-time movie houses subject to a 1948 Supreme Court ruling that movie studios could not own exhibition houses. , The Associated Press

The U.S. Justice Department will ask a court to terminate a 70-year-old antitrust settlement that barred Hollywood studios from owning theaters or trying to force movie houses from playing films they didn’t want.

The agreements, known as the Paramount Pictures consent decrees, no longer serve the public interest, Makan Delrahim, the head of the department’s antitrust division, said in a speech in Washington Monday.

The settlements stem from a 1948 Supreme Court case that dismantled the old Hollywood system in which film studios also owned the theaters where their pictures were shown. Delrahim said new entertainment services like Netflix have made the old rules irrelevant.

“As the movie industry goes through more changes, with technological innovation, with new streaming businesses and new business models, it is our hope that the termination of the Paramount decrees clears the way for consumer-friendly innovation,” Delrahim said.

Shares of theater chains bounced back from intraday declines following the remarks. Cinemark Holdings Inc. was fractionally higher at the close after being down as much as 1.2%. AMC Entertainment Holdings Inc., the largest exhibitor, closed down 3.3% after rallying back from a 6.2 per cent deficit.

The Paramount decrees were created in a world before TV was widespread, when theaters were a more significant part of America’s entertainment landscape.

The 1948 decision effectively crushed the Hollywood movie system as it operated at the time, when major studios controlled production and distribution from start to the end. They had exclusive contracts with actors and directors, and owned theaters which showed only their movies.

Today, chains including AMC, Cinemark and Regal are the biggest theater operators.

The move is part of a broader effort by the Justice Department to review antitrust settlements to determine whether they have become outdated. The government has said the vast majority no longer protect competition in the various markets where they apply.

Among the key provisions of the Paramount consent decrees is a prohibition on selling films in groups, a practice that allowed studios to force less-desirable films on theaters by linking them to more-popular releases.