I don’t believe oil will continue to rally, it’s due for a correction: D. Alexander Capital's Shover

The U.S. government projected that the global oil market will become oversupplied and prices will fall by early next year, cooling expectations that the White House may tap the nation’s emergency reserves.

Supply increases next year from OPEC nations as well as U.S. drillers will ultimately pressure prices lower. The U.S. benchmark crude will fall below US$80 a barrel by December and reach as low as US$62 by the end of next year and its global counterpart Brent will average US$72 a barrel in 2022, the Energy Information Administration said in its Short-Term Energy Outlook on Tuesday. U.S. pump prices will drop below US$3 a gallon by February, the data show.

“We forecast that global oil stocks will begin building in 2022, driven by rising production from OPEC+ and the United States, along with slowing growth in global oil demand,” the EIA said.

The Biden administration has been under pressure to act to suppress rising gasoline prices that are now at the highest levels since 2014. But the report may weaken the argument for a release of oil from the U.S. Strategic Petroleum Reserve, a move that had been seen as the most direct action U.S. President Biden could take to drive down prices, especially after OPEC and its allies resisted Biden’s calls to bring more crude supplies into the global market.

A White House official said on Tuesday afternoon that the administration has reviewed the EIA forecast and welcomes news of moderating prices. It also said that it has nothing to announce Tuesday in terms of a SPR release and it continues to engage with OPEC+ on increasing supply. 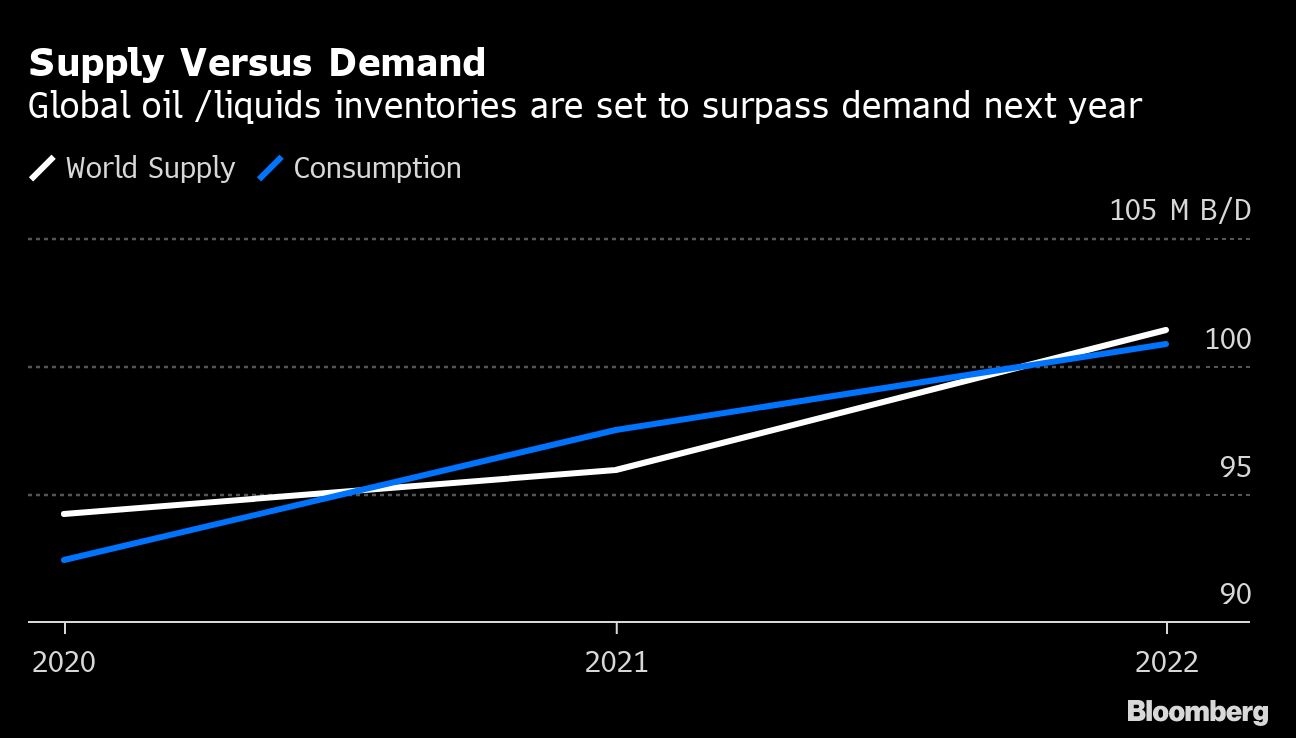 The Strategic Petroleum Reserve holds more than 600 million barrels of crude in underground caverns in Louisiana and Texas for major emergencies. Existing volumes are large enough to replace all the oil that the U.S. imports from OPEC and its allies for more than a year.

“There is no real reason for an imminent release,” said Spencer Vosko, director for crude oil at Black Diamond Commodities LLC. “The bigger question here is production. While U.S. shale producers are showing constraint it looks like global supplies could be on the mend.”

Meanwhile, U.S. crude production is expected to rise to average 11.9 million barrels a day in 2022 as drillers make a comeback. A nearly 15 per cent rally in West Texas Intermediate crude prices since July is luring some shale producers to ramp up output, most notably private drillers. While the outlook marks an expected increase in supply, it is still far from the record annual volume reached in 2019 as the recovery across major shale regions has been mixed.