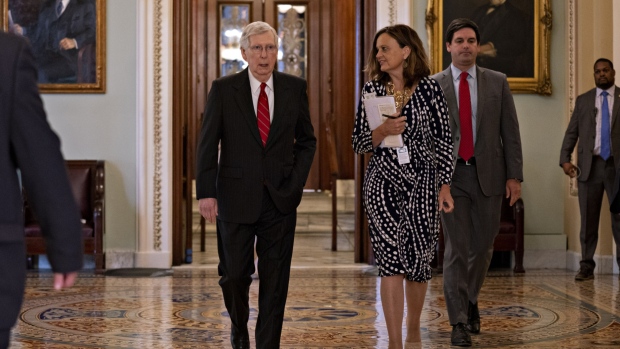 Senate Majority Leader Mitch McConnell, a Republican from Kentucky, left, walks toward his office after voting in the Senate Chamber at the U.S. Capitol in Washington, D.C., U.S., on Thursday, Aug. 1, 2019. , Andrew Harrer/Bloomberg

The Senate sent President Donald Trump legislation to extend the debt limit and allow more government spending until after next year’s election -- a bipartisan deal that drew opposition from some who expressed concern about the deficit.

Trump backs the plan, which passed 67-28 on Thursday. The House voted 284-149 for the measure last week with most Republicans in opposition even though the president had urged them to support it.

“Budget Deal is phenomenal for our Great Military, our Vets, and Jobs, Jobs, Jobs!” Trump said on Twitter shortly before the vote. “Two year deal gets us past the Election. Go for it Republicans, there is always plenty of time to CUT!“

The measure suspends the debt limit through July 31, 2021, eliminating the risk of a default until then. It also sets budget caps for two years that will permit US$324 billion in additional domestic and defense spending above the current cap levels.

“This provides some certainty for the military to rebuild,” said Senator John Cornyn, a member of GOP leadership. “It doesn’t do everything I would like certainly in terms of deficits and debt, but that is part of the ransom we had to pay in order to get the parts that I think are also essential.”

Congress will still need to pass spending bills in September adhering to the new US$1.3 trillion spending cap to avoid a government shutdown when the next fiscal year begins Oct. 1. Because the Senate hasn’t written any of the 12 spending bills, a short-term measure extending current funding is likely for at least some government agencies.

House Speaker Nancy Pelosi negotiated the debt limit and budget caps deal for weeks with Treasury Secretary Steven Mnuchin, who said Congress needed to pass it before the August recess because there was a risk of missing payments before lawmakers return to Washington on Sept. 9.

The deal reaps just US$77 billion in savings over 10 years by extending entitlement cuts a decade from now and raising customs user fees. A late push by White House Chief of Staff Mick Mulvaney for up to US$1.1 trillion in offsetting savings was rebuffed as the deal was sealed.

Republican Senator Pat Toomey opposed the new fiscal legislation because of its effect on the deficit.

“The deal extends the debt ceiling without efforts of any kind to put us on a sustainable fiscal path,” said Toomey of Pennsylvania.

Democratic Senator Jon Tester of Montana said he was opposing the measure because of concerns about the debt.

But New Mexico Democrat Martin Heinrich supported the bill, saying a lack of revenue is responsible for the deficit approaching US$1 trillion per year.

“The reason we are in the mess we are in now is because of the Trump and Bush tax cuts. If you take those away we go back to a sustainable level,” Heinrich said. The GOP didn’t offset the US$1.5 trillion cost of tax cuts enacted in 2017 when the party controlled both chambers of Congress.

Democrats praised the increases for domestic programs, which will rise by US$103 billion over current spending. The amount is US$150 billion over the spending caps that were imposed -- and since then regularly lifted -- by a deal to resolve a 2011 fiscal showdown.

“It means jobs, it means ladders up, and it means hope for the American people,” Senate Democratic leader Chuck Schumer said shortly before the vote. ”Let’s give our military, our middle class, a boost.”

Senate Majority Leader Mitch McConnell, in defending the deal earlier, said that putting the government on a path to a balanced budget would require cuts in big-ticket programs such as Medicare and Medicaid. Those programs aren’t part of this week’s fiscal deal because they’re automatically funded in the US$4.5 trillion federal budget.

Republican supporters of the bill, H.R. 3877, praised it for increasing defense spending, which would rise from this year’s US$716 billion to US$738 billion in 2020 and US$741 billion the following year. Senate Armed Services Chairman Jim Inhofe had originally sought US$750 billion next year.

Inhofe said this week that while he would have preferred more savings elsewhere in the budget, “the main thing” is providing funds for the military. He said he was finding some resistance from conservatives.

“There are a lot of them who want to have the advantage of opposing it while hoping it passes,” said Inhofe of Oklahoma before the vote.

Senate Appropriations Chairman Richard Shelby, an Alabama Republican, said his committee plans to start voting on spending bills when the Senate returns in early September. The House has passed 10 spending bills, with Homeland Security delayed over border funding and the bill funding Congress stalled due to an effort to increase lawmakers’ pay.

Both parties have promised not to insist on “poison pill” provisions in the spending bills, referring to measures that would be a dealbreaker for one party.

A dispute over funding Trump’s border wall led to a 35-day government shutdown at the beginning of this year. Trump ultimately signed bills without the full amount he sought for the wall and invoked executive authority to take the money from military accounts instead.

The Supreme Court on Friday allowed US$2.5 billion of that money to be spent while a court challenge by the Sierra Club and another advocacy group goes forward.

--With assistance from Nancy Ognanovich, Jack Fitzpatrick and Daniel Flatley