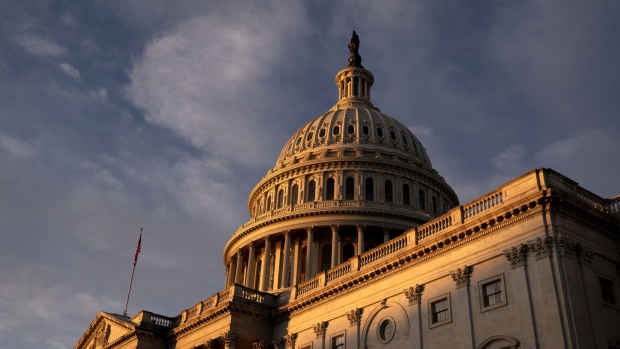 The U.S. Capitol in Washington, D.C., U.S., on Thursday, Dec. 3, 2020. House Speaker Pelosi and Senate Democratic leader Schumer yesterday threw their support behind using a $908 billion bipartisan stimulus proposal as the foundation for a new round of negotiations with congressional Republicans and the White House. , Bloomberg

The Senate voice vote approving the legislation came after several senators tried to hold the process up as they sought to force votes on unrelated issues. Those objections were overcome Friday, and the Senate’s approval, after the House passed it on 343-67 vote Wednesday, sends the bill to Trump’s desk.

The short-term spending bill is necessary because none of the 12 annual appropriations bills for the fiscal year that began Oct. 1 have been enacted and negotiations on an omnibus package wrapping them altogether haven’t been completed.

Lawmakers are also hoping to use the omnibus bill as a vehicle for more than US$900 billion in coronavirus-related aid.

The virus-relief bill has been the subject of months of fruitless negotiations, and House Speaker Nancy Pelosi and Treasury Secretary Steven Mnuchin on Thursday both said they see progress toward a final solution. But there is still no agreement on provisions to shield businesses from COVID-related lawsuits and to distribute US$160 billion in proposed state and local aid. Senate Majority Leader Mitch McConnell on Friday again suggested leaving those provisions out of the stimulus package.

The broader spending bill appears to be more on track, even though Senate Appropriations Chairman Richard Shelby, an Alabama Republican, said it probably won’t be finished until next week. He said the main sticking point is how to handle US$12.5 billion for the Department of Veterans Affairs to upgrade its health care for veterans.

Shelby has said he agrees with Democrats that the funding should be in addition to the US$1.4 trillion budget cap for the year, but the White House and House Republicans oppose the move, citing deficit concerns.

“I think the obstacle right now is at least a hurdle to get over the VA,” Shelby said Friday. “And I think we could see open field after that, but maybe not”

Other points of contention involve US$2 billion for Trump’s border wall, as well as funding for immigration raids and detention. Shelby said appropriators are nearing an agreement on that issue, but it’s not yet clear whether it will “satisfy everybody.”

Montana Senator Jon Tester, the top Democrat on the subcommittee overseeing the Homeland Security Department, told reporters he thinks differences on the wall and immigration can be resolved.

“I don’t anticipate that’ll be a problem,” he said. “I think we could have gotten this done by the 11th if we hadn’t gotten into the habit of settling deadlines and then never meeting them.”