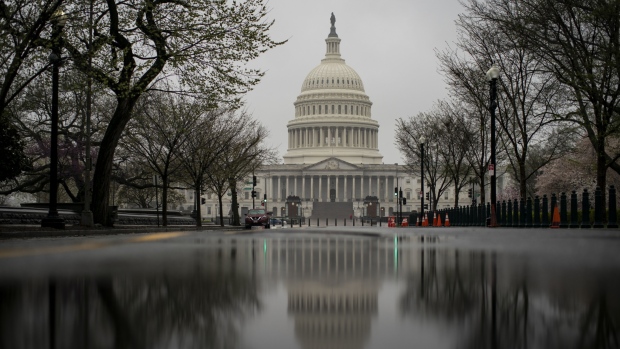 The U.S. Senate approved a historic US$2 trillion rescue plan to respond to the economic and health crisis caused by the coronavirus pandemic, putting pressure on the Democratic-led House to pass the bill quickly and send it to President Donald Trump for his signature.

The massive legislation passed on a 96-0 vote after days of intense negotiations between Senate Republicans and Democrats, who demanded changes to the bill introduced last week by Senate Majority Leader Mitch McConnell.

The package includes an unprecedented injection of loans, tax breaks and direct payments for major corporations and individual taxpayers to help the U.S. economy get through an abrupt shutdown as people avoid social interaction and businesses close to keep from spreading the coronavirus. More than 68,000 people in the U.S. have been infected with the deadly respiratory disease and some economists warn that unemployment could hit 30 per cent.

The package provides for about US$500 billion in loans and assistance for big companies, including struggling airlines, as well as states and cities. There is a separate pot of about US$350 billion for small businesses. For individuals the package provides direct payments to lower- and middle-income Americans of US$1,200 for each adult, as well as US$500 for each child. Unemployment insurance would be vastly expanded. There also is money for hospitals, some of which are on the verge of being overwhelmed.

The size of the stimulus package is unprecedented, dwarfing the approximately $800 billion Obama stimulus that passed five months after the 2008 financial crash. Together with Federal Reserve actions, the legislation amounted to a US$6 trillion stimulus, according to White House economic adviser Larry Kudlow, or about 30 per cent of annual GDP.

Yet it may not be enough to prevent a big short-term hit to the economy and a dramatic rise in unemployment. Economists and lawmakers say they expect more stimulus will be needed. Congress is already discussing a next round.

“I’ve never seen Congress move so fast to do something so large. Unfortunately, the problem may be larger and faster,” said Jason Furman, a member of Barack Obama’s economic team during the 2008 recession.

Majority Leader Steny Hoyer announced late Wednesday that the House will attempt to pass the coronavirus bill on Friday through a voice vote, in a process that would not require all members to return to Washington. House GOP leaders said they also support this strategy.

”In order to protect the safety of Members and staff and prevent further spread of COVID-19 through Members’ travel, the Republican Leader and I expect that the House vote on final passage will be done by voice vote,” Hoyer wrote in a letter to colleagues.

However, any House member could demand a recorded, roll-call vote, which has potential to drag out the process.

The outbreak has touched directly on Congress, where three lawmakers have reported testing positive for the coronavirus and several others are in self-quarantine.

Passage in the Senate had been delayed for hours on Wednesday by objections from four GOP senators over expanded unemployment benefits for low wage workers.

The expectation of a Senate vote helped propel the S&P 500 Index to its biggest two-day advance since November 2008. But stocks receded from the day’s highs late in the afternoon as the Republican senators raised their objections and independent Senator Bernie Sanders countered with a threat to hold up the legislation.

The Senate blocked an amendment to modify the unemployment benefits provision that had been offered by Nebraska Republican Senator Ben Sasse before moving to pass the overall bill.

Another delay was happening behind the scenes. According to a Democratic aide, Republicans had left out of a draft agreed upon language that requires the Treasury and Federal Reserve to publish every seven days which companies and entities gain financing through loans from the US$500 billion bailout fund.

Democrats had been demanding transparency on the loans and Schumer held up the bill until Republicans changed the text, the aide said.