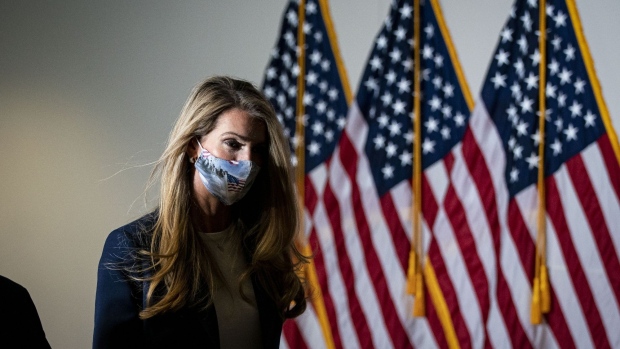 Senator Kelly Loeffler, a Republican from Georgia, wears a protective mask while arriving for the weekly Senate Republican policy luncheon on Capitol Hill in Washington, D.C., U.S., on Tuesday, Nov. 17, 2020. President-elect Biden yesterday threw his weight behind House Democrats' proposals for a coronavirus relief bill, calling for aid to state and local governments, among other measures. , Bloomberg

(Bloomberg) -- U.S. Republican Senator Kelly Loeffler, who is campaigning for January’s runoff election, is self-isolating after testing positive for the coronavirus, despite a subsequent inconclusive result, campaign spokesman Stephen Lawson said in a statement.

The senator has no symptoms and will remain in quarantine until retesting is conclusive, according to the statement. Loeffler is facing Democratic challenger Raphael Warnock in one of two runoff elections for Georgia’s senate seats early January that will determine control of the chamber.

The senator tested positive on Friday, while results from a screening on Saturday were inconclusive.