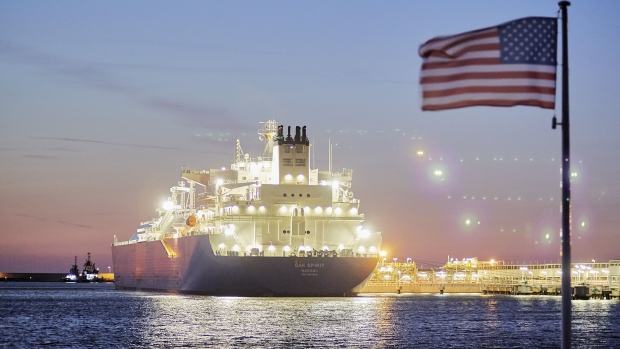 (Bloomberg) -- U.S. liquefied natural gas exporters should start signing a number of deals with European buyers over the next weeks or months as the bloc seeks to slash its dependence on Russian supplies, according to Bank of America.

But with existing American terminals operating at full capacity and proposed projects still pending a final investment decision, it will take until about 2025 before the supplies are available, Francisco Blanch, head of commodities research at Bank of America, said in a interview.

Russia is the EU’s biggest natural gas supplier, accounting for more than 40% of imports. The EU, which also relies on the country for the biggest share of its coal and oil import needs, is struggling to shift its energy policy away from Russia.

Europeans will be “careful not to over-commit themselves” to imported natural gas, with political leaders probably seeing the war as an opportunity to boost renewable energy supplies, Blanch said. Still, European demand could help pave the way for the U.S. to roughly double its export capacity over the next several years.

The European Union and the U.S. are working on an agreement that would aim to ensure a supply of American LNG and hydrogen to EU member states over the next two years, according to an official familiar with the plans. It’s unclear how the arrangement would work.

Bank of America’s Blanch says the U.S. gas should remain largely insulated from war-led spikes in international prices as limited export terminal capacity prevents the nation from immediately increasing shipments, making it a “gas island.” The heating and power-generation fuel is expected to average $4.10 per million British thermal units this year, he said. That’s below current prices hovering near $5.40.