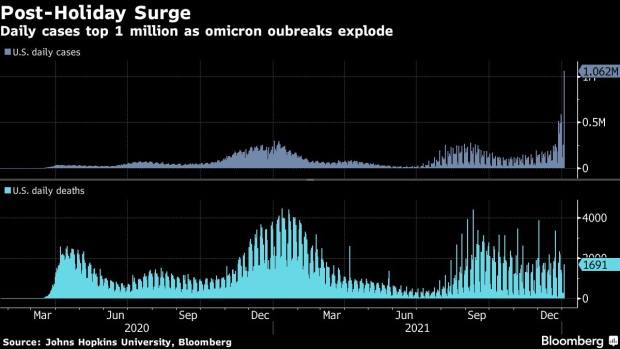 (Bloomberg) -- More than 1 million people in the U.S. were diagnosed with Covid-19 on Monday as a tsunami of omicron swamps every aspect of daily American life.

The highly mutated variant drove U.S. cases to a record, the most -- by a large margin -- that any country has ever reported since the pandemic began more than two years ago. Monday’s number is almost double the previous record of about 590,000 set just four days ago in the U.S., which itself was a doubling from the prior week.

America’s daily case count on Monday was more than twice the number seen in any other country at any time. The highest number outside the U.S. came during India’s delta surge, when more than 414,000 people were diagnosed on May 7, 2021.

The stratospheric numbers being posted in the U.S. come even as many Americans are relying on tests they take at home, with results that aren’t reported to official government authorities. This means that the new record is surely a significant under-estimate.

The data from Johns Hopkins University is complete as of midnight eastern time in Baltimore, and delays in reporting over the holidays may have played a role in the rising rates.